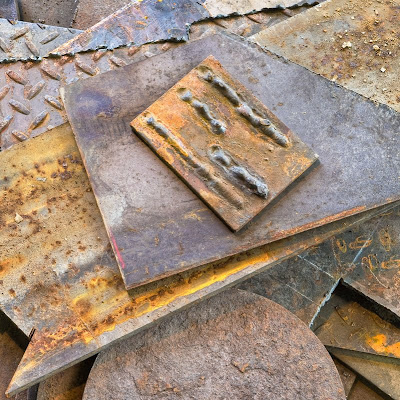 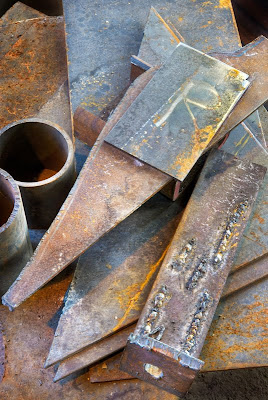 When we arrived at the shop to photograph the steam locomotive, the workmen started tidying up a bit behind the loco and my last efforts were to photograph the piles of scap they' built up - I'm quite sure they thought I was mad!
Posted by George Barr at 10:52 pm 2 comments: 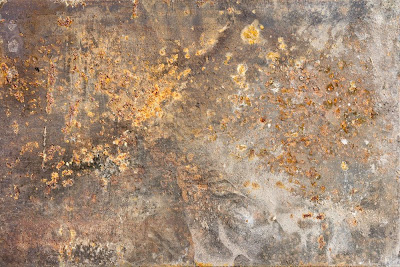 Sitting behind the tender were scraps of metal, including this single long beam, which end seemed interesting to me.
Posted by George Barr at 10:33 pm No comments: 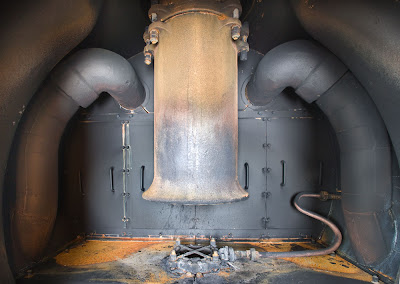 This is what it looks like when you peer into the smokebox (front) of a steam locomotive - only it's a hell of a lot darker - 20 second exposure. 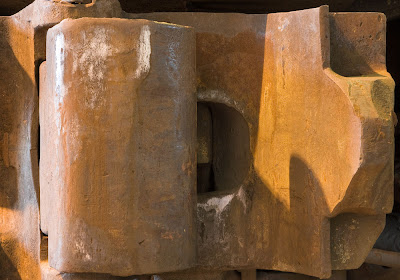 This is a close up of the knuckle of a coupler on an FP7 diesel locomotive - looking more like a piece of pottery than a several hundred pound chunk of cast iron. 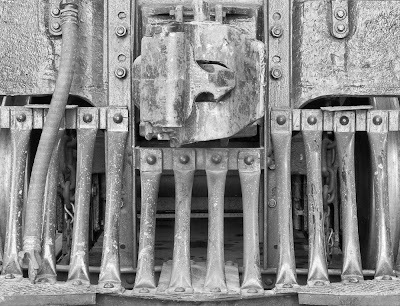 Cow catcher on locomotive CP 2816 Hudson (4-6-4) locomotive, weighing 232 pounds, using 10 gallons of fuel per mile, along with 100 gallons of water. You don't take this to the grocery store for bagels.

Here you have an angled view of the front coupler on 2816. It's actually painted black but lit by sodium vapour lamps - and this is after I corrected the colour! 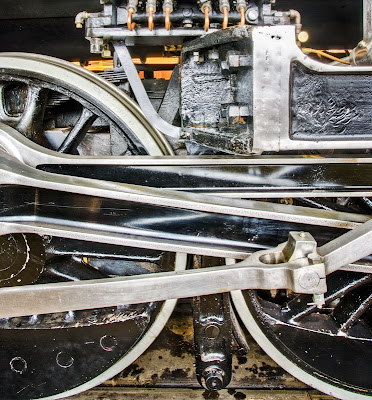 Shots of loco drivers are common - I used a couple in my last book and I was one of a long line of photographers caught by the power, heft, and strength of these magnificent beasts. This time I found the drivers and connecting rods in a particularly interesting pattern, with the lubricator sitting above.
Posted by George Barr at 9:00 pm 4 comments:

1) manual focus - but rely on focus confirmation in viewfinder

3) mirror lock - always when on tripod and

6) exposure blending - occasional - 1% of shots, I tend to shoot in fairly soft light

7) stitching - even with the 1Ds2, I still stitch about 1/3 of the time, especially if the image is going to differ from 2:3 - so for square images and panoramic images especially.

9) my most frequently used lens is the 70-200 f4L, why would a landscape photographer want to carry the extra weight of the 2.8?

With IS lenses and high ISO getting better quality results, you may question the need for a tripod. There are many situations in which depth of field is not important and you may well be able to make the image successfully without compromise and without tripod.

That said, there are lots of situations in which there are two or more important parts to the image, not in the same plane of focus and for which added depth of field is the only remedy.

In the old days there were depth of field scales on lenses, though anyone who did serious work and made even moderately large prints knew that they needed a smaller stop than the scale suggested. With zooms we have largely given up on the tiny depth of field scales even if they are there.

With the increasing use of full frame sensor cameras, shallow depth of field is a major consideration and often it's necessary to stop down as much as possible - basically just shy of the point where diffraction really starts to become an issue. For me, with a full frame camera, this is f16.

Every single time I have been out shooting without tripod, I have regretted not bringing it along.

No tripod is perfectly steady. The less steady ones are more likely to be compromized in a breeze and require longer after touching the camera or lens to dampen the vibrations and require more care with the cable release. Lighter tripods run the risk that the camera will overwhelm the tripod and the whole rig will tip over. In my experience the tripod should weigh as much as the camera/lens combination. Mind you, that doesn't mean you can't use a light tripod - you just have to be a lot more careful. If you are using a light tripod, I highly recommend you go with an L bracket for the camera so that when photographing vertical images you don't have to flop the camera over on its side.

For a given size of tripod, carbon fibre is of course significantly lighter - but perhaps you could get away with the next size down in legs and not have to fork out up to $1000 for carbon fibre (Gitzo).

Manfrotto's newer tripods allow the centre post to swing horizontal. My feeling is that they aren't heavy enough or sturdy enough to hang my 1Ds2 from but they might work well with a smaller lighter camera and there are certainly times when getting out over a railing would have been really useful.

If you do studio work, carbon offers no advantages and might in fact be a disadvantage as here weight is all to the good.

Four and five section legs require good quality and fit, but at least they fit in your suitcase. Don't forget that you can travel with the centre column removed and even the ball head off to make the overall length less.

I used to insist on spike feet for landscape work but my current gitzo tripod just has rubber ends and frankly, I don't think it makes a difference. My tripod legs after two years of a lot of use are just as stiffly connected to the top of the tripod as on day one and can stand on slippery ice at almost any angle without requiring the spread locks to be set - a measure of quality.

Quick release plates are great and I'd not want to go back to screwing in the camera each time I use the tripod, and having the camera rotate on the tripod, just after everything is aligned perfectly.

In theory there is more risk with the arca type clamp which is open at either end but in several years of use I have never had a camera come loose, with arca, RRS or acratech devices. I find the ability to slide the camera left or right great with tilt/shift lenses.

I don't know any serious photographers who continue to use pan/tilt heads for their still photography. Ball heads are almost universal. I have a very small Manfrotto ball head with quick release plate on my 925 tripod for the 40D, making a light portable and packable combination.

For a lightweight traveling tripod I'm willing to compromise on height and will accept the use of up to 6 inches of centre column to get to eye hight.

Don't forget that on a slope, the downhill leg can never be long enough and the fact that my 1349 tripod will go well above six feet is sometimes helpful.

Although my f4 70-200 can be used without tripod collar, it's a lot steadier with it and the whole rig is better balanced.

There are times that tripod PLUS hands on camera is steadier than tripod alone - in high winds or really long lenses (300 mm.+) in which even with mirror lock, I'm concerned about shutter vibration. Mind you, this only works for reasonable shutter speeds. Sometimes I leave off the lens hood if there is a cross wind.

Since you are going to be standing there with the cable release in hand, it makes sense to stand upwind of the camera if possible.

Remember that the whole point of mirror lock was to get the vibration out of the way and firing the shutter right after locking the mirror is somewhat defeating the point - wait a couple of seconds. I confess I have to remind myself of this now and again as I get caught up in the moment.

Tripods, of course; don't defeat subject movement and sometimes an higher ISO may still be necessary to defeat wind.

Remember that you can sometimes make use of a tripod when the legs are together, simply leaning the rig against a fence or wall or over a railing to get the image you want. You can even hold the whole rig out over a canyon should the need arise.

Once on location, I quite happily carry my camera and tripod over my shoulder. I take into consideration what it might bump up against - concrete walls not being famous for their cushioning effects on camera bodies. I do look over my shoulder to see that the lens is more or less aiming down so if I do catch a branch or debris should fall, it isn't going to land on the lens.

Uwe Steinmuller carries a small plastic 2 step ladder with him in the car for those times when you have to see over a fence. Ansel mounted a huge aluminium plate to the top of his vehicle so he could stand up there, with tripod, for the best view. I have been known to carefully climb on the top of a Chevy Suburban roof but sure wouldn't do that with my car - but don't forget you can use live view with the latest cameras to position the camera above eye height and using the centre column and not even look through the view finder.
Posted by George Barr at 10:11 am 3 comments: 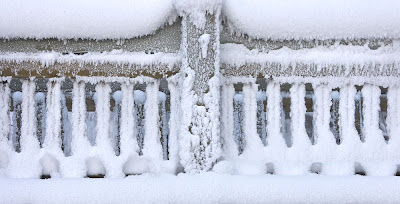