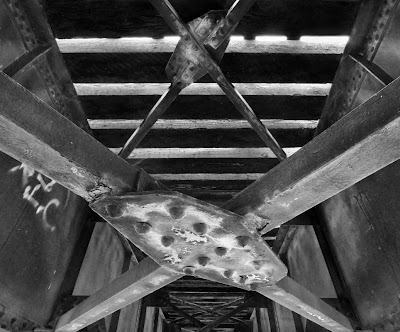 I'm absolutely in love with live view on my 5D2 - the ability to check focus in the furthest corners and high magnification is terrific - no more need for mirror lock up accessed through the menu system - just press the button. Not only that, no shutter at all till the shutter closes - I do need to remember that unlike my previous workflow in which I'd flip the mirror up, let the camera steady then take the shot, now the shot is taken as soon as I press the cable release - so let things settle first!

This bridge shot was made this morning, an old abandoned CN line.
Posted by George Barr at 2:39 pm 1 comment:

In the past I have written about being careful not to work to please the customer, to stick to your principles and to follow your heart, which is all very well, but few artists are so self centred that they can work in a vacuum. The other night on CBC, Milton Glaser was being interviewed. This design consultant (who came up with the I Heart N.Y. concept) was commenting on creativity and pleasing the customer and other art issues - basically all the same things we struggle with as photographers. At one point he quit his commercial studio because he and his studio had such a strong reputation that everyone wanted them to just do more of what they'd been brilliant for in the past and he wanted to move on and felt he couldn't do this in the same organization - even though he'd started it.

The other day I posted the picture of the moving leaves. I rather like the image but it's been on my office wall for three days and not a single person has commented on it - and they normally do comment on my latest pictures. Clearly they don't get it. Now, my patients are for the most part quite well educated, people with university degrees or highly responsible jobs many of them. O.K., they aren't art experts, most of them. What do we do when not a single person goes out of their way to comment on our images?

When we make some more normal images and so get positive feedback for those, it helps us then move out on a limb to do more interesting work which may be appreciated by a much smaller audience, or even no audience. When there is no history of appreciation because we have never done "normal" work, it can be a bit more challenging. In that case, it can take a very strong personality (ie. being very egotistical) to be able to work in an environment of no positive feedback.

That in the history of photography there have been a number of people who quietly worked away on their own, not sharing their work with anyone only to be discovered late in life or even after death confirms that it is possible to work without appreciation. The significant difference here though is that these people didn't put their work up for evaluation and so never had any negative feedback. For those of us who do submit to shows, contests, publications and posting to the net, it is no longer possible to think that "well, my work is great, it's just not discovered yet".

I have been scouring photo.net and photosig.com for good colour work that I might then be able to comment on and the work that rates highly on these sites is frankly pretty mundane - oversaturated colours, cute babies, naked women and overly photoshopped skies. Photo.net used to have editors picks of the week which were quirky and much more interesting and several times I have been able to point you to wonderful photography but unfortunately they don't seem to do it that way any more, picking instead themes which seem to generate a lot of cliche images.

Some people are "photographers' photographers", that is they are most appreciated by other people educated in the nuances of fine print making and photography in general. Others seem to be most appreciated by galleries because their work is different and fresh (not to say weird).
I guess the trick is to find the right audience for our work. It doesn't have to be a large audience (unless we insist on making money from our photography). Fortunately the net is huge and the varied tastes of people using it, well, it doesn't matter how odd your taste is, there's bound to be other people with similar interests. Hey, if Alberta can have a gopher hole museum, there's a place and an audience for us all.
Posted by George Barr at 11:28 am 8 comments:

my current printer is an Epson 3800 but the issued discussed here also applied to my Canon 5000 I used until recently.

My normal gloss paper is Harman FBAL which produces wonderful images in 8.5X11. I have an order for two 17X22 prints and thought that paper this glossy behind ordinary glass might create a nightmare of reflections and wanted something with a bit more tooth. I thought I remembered Ilford Gold Silk as being like that and bravely purchased two 10 sheet boxes of 17X22 paper.

The texture isn't as much as I remembered and the gloss of the paper itself is quite low - net result is that prints show a large amount of gloss differential. Perhaps I'm unreasonable in wanting to not see this as I walk towards a wall mounted print but frankly I find the gloss differential a deal killer for me - back to the drawing boards. I went back to the store and got a refund on the unopened box and went to a second store to get some Moab Entrada Bright White, my previous standard display paper. Problem is, compared to the Gold Silk print, the image seems rather flat - the sense of the third dimension with the semi gloss Ilford paper is gone. It's odd - whatever tones I look at seem to have been reproduced similarly, yet when I look at large areas, the print just lacks that snap that has been described over the years, the parts of the image don't seem separate somehow.

Where do I go from here? I suspect the customer won't care or notice and would probably find the matte print easier to deal with but I notice and it bothers me. Prints made on Epson Semi Gloss Premium paper seem to have just the right amount of tooth for large prints, but the paper is so darn thin - if only they made a heavyweight equivalent.

I guess the paper battles continue, with no definitive answer in sight.
Posted by George Barr at 12:28 pm 6 comments:

After three intense months working on the book, I finally have a break as the layout editor is doing her thing. I have actually found it hard to get back photographing but today decided to take advantage of some windy weather to photograph in the back yard.

I strapped on my 10 stop ND filter only to find it so opaque I couldn't even see the image - so I took it off to focus, then tried to replace it - but guess what - that changed the focal length of the lens - so I scrapped that idea. I'd already been thinking of getting one of those Singh Ray Vari stop ND filters so this has settled the question, I will go ahead and order one in the largest size common to my lenses, and adaptors for any others. As it happened, in cloudy weather, I was able to shoot at 1/8 second and in the gusts get significant movement. It took a lot of images to get just the right amount and direction of movement and it was important to make sure the background didn't include any bright highlights from the sky.

I think this could be the start of an interesting project - recording movement - hardly original but that doesn't matter. Remember to click on the image to see it much larger.
Posted by George Barr at 10:30 pm 3 comments:

In response to Billie's query of where have I been - the last three months have been an intense series of rounds editing the second book Camera To Computer. Finally it is off to the layout editor. There's lots more work to come but a short breather is very nice thank you.

I have two requests of anyone who is still hanging around reading my blog.

1) I need some ideas for topics.

2) I have an idea for a third book "Why Phhotographs Work", which would be a series of wonderful images by other photographers along with 1 - 3 pages of description on why these images succeed. it would be a modern "Looking At Photographs" without all the talk of technique and media - and while I have a number of great black and white images, I need more great colour photography. Photographers have to be alive. Send info on how to access the particular image you are recommending.

Oh, and after not photographing for three months, I shot this spatula on the weekend.

George
Posted by George Barr at 7:59 am 5 comments: