Further On The Value Of Projects

Another advantage of doing projects is that we tend to get better with time. Not only was Pepper # 30 Edward Weston's thirtieth attempt at a pepper, he'd also been working with a variety of other vegetables and shells. Although his other vegetable images do get included in shows and books, it is the single wonderful image that many consider one of the greatest photographs ever. So it would appear that even though this was part of a project, it's ok to come out the other end with a single iconic image.

Given a choice between being known for 20 mediocre images vs. one great one, I think most of us would vote for the one great one, in the hope that having made one, it wasn't a fluke and we can do it again, eventually.
Posted by George Barr at 2:13 pm 4 comments:

Wayne asks for further clarification about depth of field and comments on lenses for APS-C cameras and so on.

And believe it or not - that's it, no other factors play a big role in measuring depth of field.

So, in Wayne's example of a 35 mm. lens on a DX sensor Nikon and comparing it to 35 mm. film camera (or a full size sensor camera), you have a sensor 1.5X smaller. The actual focal length is 35 mm., whether designed for a dx camera (APS-C size sensor) or full frame.

We have three factors, two of which didn't change - focal length stays 35 mm., and f stop remains, say f 11. All that changes is which camera the lens is on (or which 35 mm. lens you are using, but that's the same thing).

Now, if you did want the same angle of view, you'd need to use a wider lens on the small sensor camera, so you would be changing the focal length. Here you would still have the magification issue, but you'd have the square of the change in focal length - essentially 1.5 squared and divided by 1.5 - that is, the lens you'd need for the DX sensor camera, would be (35 divided by 1.5) mm. long - approximately 21 mm. The depth of field would be approximately 1.5 times better with this lens on this camera when compared to the same view, same print size on the full frame camera.

This explains why it is so difficult to get shallow depth of field with a point and shoot camera with a sensor one quarter the diameter of 33 mm. film.

What does twice as much depth of field mean - well a simple way to look at it would be sharpness from infinity to 4 feet instead of infinity to 8 feet, or a range of sharpness of approximately a foot behind and in front of the subject instead of 6 inches.
Posted by George Barr at 3:46 pm 4 comments:

Pete asks why I felt the need to use blended focus, and Helicon Focus specifically, to process the recently posted image (More From Stanley Park).

1) I'm using a full size sensor camera (5Dii) and the larger the sensor the less the depth of field. It's possible that a small point and shoot with it's tiny half inch sensor might have had enough depth of field. Certainly an APS-C size sensor would not in this situation.

3) my own testing shows me that f16 is the smallest practical f stop for my camera. Beyond that, the sharp bit get fuzzier and there isn't sufficient gain in depth of field to justify this loss (diffraction).

Why Helicon Focus instead of Photoshop - simple, it does a better job. Helicon has been doing this kind of blending for about 7 years, Photoshop only the last two versions (ie. about two years). Helicon's whole raison d'etre is blending, Photoshop made this one of many add-ons.

Are there limitations? Yes. Two problems occur and both happened here. First, as you change focus, the image size changes. In normal simple design lenses, as you focus further away, you include more (as if you were zooming out or moving away). Oddly, with my 24-105, the exact opposite happens, as I focus further, the image gets larger, ie it crops. So, if I frame perfectly on the near focus, it crops too tight at the far focus. The second and more serious problem is that with wide angle lenses especially, the software has trouble blending the edges of the image and you start to get double or even tripple exposures along the outside of the image. As this only affects about 10% of the image, cropping takes care of it - if you have room to crop 10%. I don't see problems with my 70-200, so in general I'm talking < 70 mm. focal length.

Other than that it works well. My preference is not to do a lot of sharpening on the image before blending - amount 25 in camera raw, considerably less than I'd use on a single image. I do not use any clarity enhancement (increased local contrast) as this tends to be exaggerated in the blending process.
Posted by George Barr at 1:23 pm 2 comments: 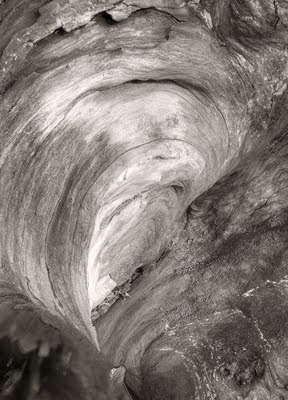 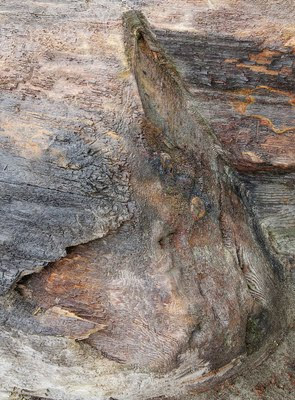 just back from a visit to Vancouver, to see our daughter and take a break. Found this partly burned stump on the beach at Stanley Park. Blended focus with Helicon Focus, a little bit of Akvis Enhancer to the centre only and otherwise pretty straight. Canon 5DII.
Posted by George Barr at 8:53 pm 2 comments:

When I was in Victoria last fall, I couldn't find the ideal tripod for travel purposes, and ended up picking up an inexpensive Slik travel tripod, complete with built in ball head and mini-quick release plates. It was adequate and I got some lovely shots thanks to that tripod. The head though was the problem, especially for vertical shots. I normally use an L bracket from Really Right Stuff for my 5D2, so what I've done is order the smallest lever release head from the same company and will place that on this super light tripod. It's aluminum but reasonably sturdy and tall enough for travel purposes.

The big thing with a travel pod is it's nice if it can go on your backpack, which theoretically huge tripods can do, but in practice don't very well. Also, it needs to fit inside luggage when flying, and there are times a tripod that doesn't tie up both hands to carry is very nice.

Some might wonder 'why even bother with a tripod', especially with modern cameras great high ISO Imaging. For me the reasons are:

1) to be able to stop down for max. depth of field
2) shoot under marginal light - often more interesting light
3) to make blended images for incredible depth of field using Helicon Focus
4) blended exposures for HDR without the worry of misalignment of images.

These justify lugging a tripod, and if it can be a small light one without too much compromise, well all the better.

Let you know how the new combo works when I return.