None of us wants to be a copycat, or even worse, to be thought of as one, but how to avoid it. If it's true that by now everything has been done before, even the most original ideas are likely exist already, somewhere, sometime, even if you didn't know about it. Coming up with what is for you original because you didn't know of someone elses work does not relieve you of being seen as unoriginal - exactly what you strived to be.

So how do we say something interesting as photographers?

It is argued that no one else will bring to your subject your life experiences, your biases, and the accumulation of the things that interest you, catch your attention, or the way in which you like things arranged or presented. The problem with this is that unless all of what is unique to your viewpoint comes with a considerable dollop of skill (notice I didn't say talent), little is likely to come of it.

It doesn't take long to realize that as a novice photographer, your images are typically crap, either technically or aesthetically, and likely both. So you start reading, and you discover a photographer you like. For me it was Ansel Adams. I tried to emulate him, to near complete failure. I expanded my book collection to include other landscape photographers of the same ilk - Bruce Barnbaum, John Sexton, even Edward Weston, but because their approach to the landscape was similar, I didn't learn as much as I hoped.

Then I came across the work of David Plowden - medium format, not grand landscape, often industrial or small town America - and here was something different - the technical quality was there, but the subject, the closer presentation, and the introduction of a whole range of other subject matter really opened my eyes.

I went back to the work of Brett Weston and instead of concentrating on his landscape work this time round, studied his close work and especially his abstracts.

I acquired a book of Arnold Newman portraits and learned a lot about design.

I could go on, but I think you get the point. The path you take will almost certainly be different based on what you like and what motivates you, but the point is that by expanding your horizons, even if you do come across a style of photographs you like, say those of Michael Kenna, if you then see a scene that reminds you of his images and want to photograph it, you do so with the entire path of your experiences and image education behind you. If you then combine that with your own personality and experiences, there is a good chance of producing interesting original work.

When I wrote the third book, I included Michael Kenna and then Michael Levin. In the essay i wrote on Levin, I made a point of discussing the differences between the two Michaels. Not surprisingly, Leven had been through this all too many times and asked if I could eliminate the comparison and I could see his viewpoint and so respected his wishes.

In a way that was a pity, because I don't see Levin's images as copying Kenna - sure they pick some similar subjects, and photograph with long exposures and use the square format at times, but there are huge differences in the vast majority of their images. Kenna's images are dark. He favours burning in the edges, and isn't afraid of grain. This gives his images a dark moody atmosphere.

Levin comes from an 8X10 background and his huge prints are creamy smooth and speak of the infinite and are much more meditative than moody. I don't think Michael Levin should be in the least uncomfortable with comparisons.

The worst thing we can do as photographers is to wear blinders, to avoid anything unfamiliar, uncomfortable, different.
Posted by George Barr at 12:01 pm 5 comments:

OK, so perhaps this is a way to show the difference. Here are two huge enlargements of a tiny section of image. SO enlarged that virtually no detail is visible in either image, but what you are seeing is each square is a pixel, and look at the difference in tonal variation, even both images had similar overall contrast, highlights and shadows. This isn't noise you are looking at - it is genuine detail as confirmed by careful inspection of lower magnification views of the images show.

The first is the Canon 1Ds3

and the second is the Pentax 645D

This even has implications for stitching - I can easily equal the pixel count of the Pentax by stitching two or three overlapping Canon 5D2 images, but the inability to resolve low contrast areas will remain.

And I haven't even begun to look at shadow areas in which the differences between the two cameras is far greater. That Pentax, with all its limitations (no live view, shallow depth of field) may just be what I'm looking for.

Below are 100% crops of the same area, Canon first, Pentax second. 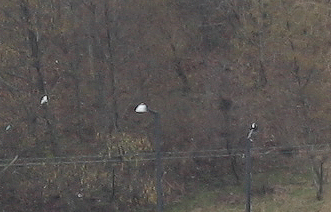 As you know, I have been struggling with whether to go to the Pentax 645D. There is a controversial article by Mark Dubovoy on Luminous Landscape at the moment - to the effect that 'real photographers shoot medium format'. Of course, that isn't what Mark said, but it is what he implied - that no matter what the print size, one could see the difference between medium format and smaller formats.

The example he used showed distortion with the dslr image, and greater contrast and thus less well controlled highlights, and better shadows.

Of course, much of this is a function of the particular lens and f stop he chose to use, and I dare say the two images could have been made to look MUCH closer to each other with a bit of care.

My immediate reaction was 'what a load of bull', but then I calmed down and decided to look at far better comparisons made in some of the reviews of the Pentax 645D, in which images are compared to the  Canon 1Ds3.

I made prints of reasonable size, 24 inches in the long dimension - something that both cameras should be capable of making. I then looked at the images at 100%.

I have poured over the images, and here is what I have found. If one looks at the finest details, branches on the horizon miles away, there is nothing to separate the Pentax from the Canon at this size of print.  The same applies to railings and bricks and anywhere the contrast in tones is significant. Where I can see a difference between prints is in the low contrast areas, branches against bushes or downed leaves. Here there is a noticeable difference in the Pentax images - it's as if large areas (up to 1/4 inch of the print) were smeared, the colour blended, a complete absense of texture and detail and even simple variation in tone, on the Canon image. it isn't about greater resolution (which doesn't really show up until you make very large prints), but if the Canon can smear details over 1/4 inch at this size, it can still do that over 1/8 of an inch in a 12 inch print - that is definitely visible.

I don't know what the difference is - whether there is a lot more manipulation of data to squeeze every bit of accutance (edge sharpness) and low noise out of the Canon at base ISO, or whether this loss is the fuzzy filter, or due to the number of bits per pixel in the pipeline, or what - all I know is that for all I think Mark picked a poor example, he is fundamentally right that there is something different about medium format.

Whether this will still be true when there are 36 megapixel full frame dslrs without fuzzy filters remains to be seen.

It reminds me though of the days of film when people using Technical Pan and special compensating developers could show extremely sharp prints, albeit terrible ones, lacking in the tonalities that were readily visible in an 8 inch print when comparing 6X6 with 35 mm.

Careful examination of the two digital images at 200% clearly shows that no amount of sharpening or local contrast enhancement is going to bring back the missing texture in the smaller camera images - for whatever reason.

I wish I knew the reason. It would help me decide whether to fork out $10,000 for the Pentax, or spend almost 2/3 less for the next generation Canon or Nikon with 36 megapixels. Those cameras will have sensors 3 years newer than the Pentax, but their pixels will be considerably smaller than the Canon 1Ds3 has now - does this mean even more loss of subtle contrast detail?

Someone showed my their new Canon ?5100 dslr and I couldn't believe how small the image was in the viewfinder - having been used to a 1ds2, 5d2 and recently trying the pentax645D.

Last weekend a friend let me play with his new Nex 7. The sun was low and bright, snow on the ground, and I could look at the viewfinder and see the image just fine, with the sun visible off to the left side - utterly amazing, and far better than my own Panasonic GH2. I much prefer the controls on the GH2 (exc. for the fact that I always press the menu when I grip the camera), but the viewfinder on the sony really was excellent.
The image was smooth and seemed to refresh a lot faster than my GH2.

I think the time of the slr with electronic viewfinger, a la the Sony A series cameras, has arrived, and it is only time before Canon and Nikon abandon bouncing mirrors.

Whether mirrors will be needed at all (as per the A series for focusing) or will focusing on the sensor become faster as processors get more powerful, I suspect the latter and we will have rapid focus, live view, tilting viewfinders etc..

The ice is covered in needles, sticks, and unspecified black spots, which are taking some considerable time to remove.

I used the magic brush to select the white areas that weren't completed by the stitch, deleting and filling with content aware fill, but I should have expanded the selected area by at least a pixel to avoid lines not filled - easily fixed but only if you look at the image very large on screen. 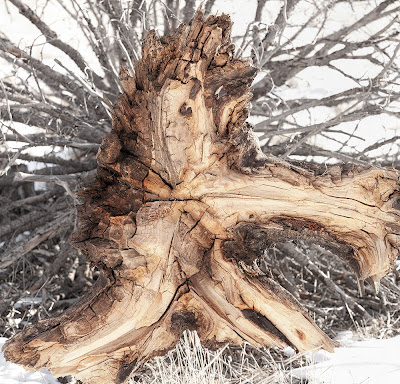 Three image stitch, some desaturation of colour all over - the branches were already almost monochrome.
Posted by George Barr at 12:35 am 3 comments: