I was reading TOP (the online photographer) today, on making snap judgements on whether images are anything from wonderful to crap, and the response from one reader that the best images all were of the same style/subject that he photographs.

This got me thinking. How much can you learn from looking at images similar to yours? You might well improve your composition, tonalities, lighting, or even sharpness, but there is unlikely to be any quantum leap in your abilities as a photographer.

If instead one were to take some images you definitely don't like, but which are consistently recognized as wonderful and spend some considerable time with them, just perhaps that quantum leap in abilities might just happen.

Apropos this, I can't help but read the reviews of my books on Amazon, and of late there have been several extremely negative reviews of both my writing (which is fair enough) and of all the photography in "Why Photographs Work" which is frankly pretty darn stupid. In the end, these kind of negative reviews "I only saw three or four photographs I liked" say far more about the ignorance of the writer of the review than it does about my book, or for that matter, any book.

What they are saying, in essance, is that they don't see any redeeeming worth in the photographs of Ted Turner, Bruce Barnbaum, Michael Kenna, Beth Moon, Elizabeth Opalenik etc.

Given the multipublication of their work, the numerous books they have in print and the general respect  in which they are held, it would behoove the photographer who feels that way to spend some time studying these and other famous images they don't approve of and if over time they still can't see the worth of such images, should sit down with someone of experience who does.

One of the great joys of exploring the world of art is to find new great artists and to learn to appreciate their work.

Since the development of youtube I have 'discovered' the work of Queen, and its leader Freddy Mercury. I'd heard the name, never knew the work. It's been a fantastic trip, and such a tragedy to lose someone of his talent 'before his time'.

Anyway, I was giving a talk on photography last weekend and used a couple of music analogies, including a short clip from Queen, which not one person in the audience of more than 100 was able to identify.

You can look at this as sad, that they have been denied this great music, or alternatively be glad for them that they can come across Queen's work for the first time. Where was I when Queen was at its height. Wasn't I ready for it at the time? 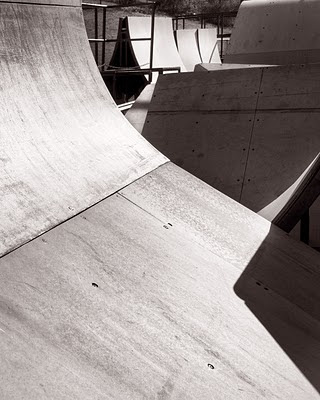 For the last year or so I have noted that each Fall, a nearby city storage area becomes cluttered with interesting curved shapes. I guessed that these were temporary skateboard ramps set up in various communities for the kids, but the stacked shapes fascinated me. An attempt to photograph over the chain link fence after wading through waist deep snow last Winter was a complete bust, but today after work I stopped by and got permission to go in and photograph.

Initially the sun was very strong and I had difficulty coming up with suitable and manageable compositions. I switched over the camera to exposure bracketing (Panasonic GH2), and continued to shoot.

I love the ability to quickly set controls on this camera - from single to multiple exposure, from spot reading to average, changing ISO and so on.

I strongly dislike that my right hand almost constantly triggers the menu function while I'm trying to shoot. I may actually have to put something on the back to protect the button more.

I'm not in love with the EVF - in sunlight it really is the pits with glasses on - I understand that those lucky enough not to need glasses are fine with it - and of course in lower light it's wonderful - but I wouldn't choose a similar evf again. I constantly had to use one of my hands to shade the viewfinder and my glasses so I could see the viewfinder at all.

I haven't blended any of the multiple exposures yet - this was simply a pick of the litter so to speak - the exposure which produced recoverable highlights and adequate shadows.
Posted by George Barr at 11:19 pm 2 comments: 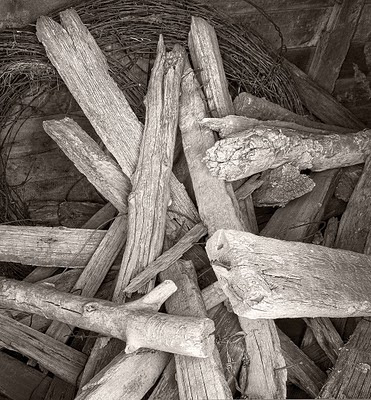 Shot last Fall, but couldn't quite find the right crop or editing at the time, and today felt ready to tackle it. Focus blend of course, though I did photograph this with the 5X7 too, lens tilt to adjust focus plane. Am yet to process the negs though.
Posted by George Barr at 10:07 pm 1 comment:

Just stumbled on the blog of Andy Nixon and he has some very interesting content. I have just finished a short video of Michael Levin out photographing in Japan and when seen full screen, you get to see several of Michael's images at a great size.

Still to be explored are other videos on Paul Caponigro, Charlie Cramer and David Ward. I'll be back.
Posted by George Barr at 12:25 am 2 comments: 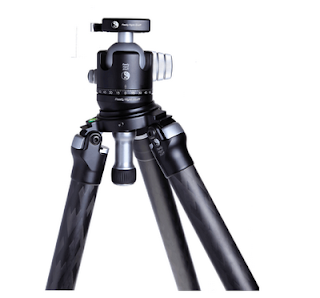 For a long time I have been using the Gitzo series 3, 4 section tripod, with a centre column and an Acratech ball head. After last weekend's shooting in the wind and watching the magnified image on the lcd waving around, I decided to do something about it and today was my first opportunity to try out the motified rig.

Out went the centre post, Manfrotto leveling head and Acratech ball head, all of which perched the camera a good 8 inches above the top of the tripod.

Instead I now have the Really Right Stuff Leveling head that directly fits the System 3 tripod 75 mm. opening. On top of that I have the BH 55 RRS ball head with lever opening.

I'm impressed with the significant addition to steadiness and the leveling head for the tripod works a treat - one hand on the camera, a twist to the handle that sticks below the tripod, eye on the level and I'm quickly set up for any panos I might make.

It really is a pleasure to use well designed equipment. I should say though, that the Acratech head was lighter, just a bit taller (3/4 inch) and has worked extremely well. It will remain on the centre column for when I still need that. 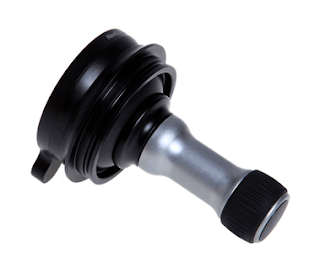 Photos from the RRS catalog.
Posted by George Barr at 5:52 pm 1 comment: 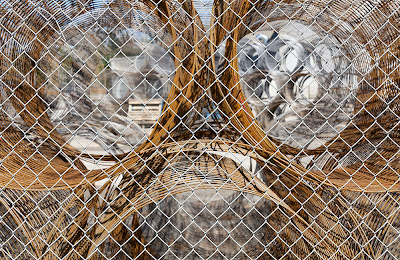 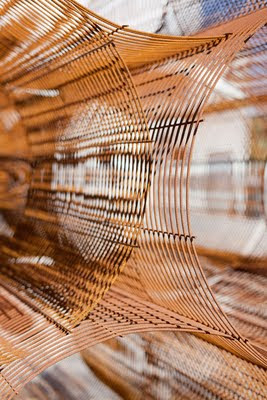 Just having fun. The top image was done both wide open and stopped down and I preferred the latter. The bottom image was wide open and would have been a disaster stopped down, 70-200 mm. lens in both cases.
Posted by George Barr at 5:42 pm 2 comments: 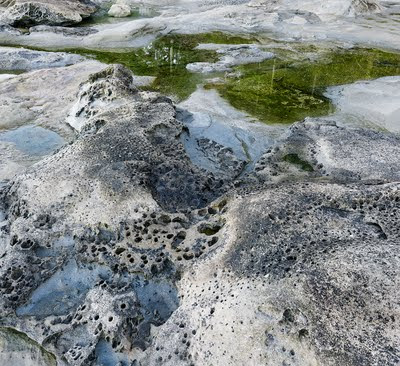