There's little doubt that there will be an Ipad 3, and it MAY have 2048X1500 resolution. Even if it doesn't, there likely will be one of that resolution soon. That would put it almost on a par with the wonderful screen of the iphone. As photographers we are going to have to be ready for this. For showing portfolio images this is a non brainer, but it starts to become more of an issue when we need that resolution for ebooks and Ipad versions of Lenswork and optimum display of our images and dealing with people copying that "high res" file.

A little thought though shows that a 2048 pixel file will print optimally at around 7 inches. This barely makes a print (with a generous white border) on 8.5X11 paper. Anyone who would be satisfied with a file this size for printing large wasn't going to pay for a big print anyway.

I have just placed an order with John Wimberley for his new book and am really looking forward to having it. I'm getting the collectors edition which comes with a print (the least I could do after he contributed to my recent book). But what am I to do with the print?

I can certainly frame it and probably will, but wall space is limited, both at home and at work, half our art work isn't on the wall as it is.

If an iPad of this high resolution looks as good as I anticipate it will, we are soon going to see a fundamental change in how images are viewed. How should we charge for a digital file of this size so someone can enjoy our work on their new and improved iPad?

Imagine being able to afford hundreds of fine images and view them on your iPad, able to flag favourites, divide into categories, easily read the text or metadata, then hide it again?

The fundamental block to being published has been the cost of an initial run, and the difficulty in selling enough books to pay for that. Blurb has helped, but as a commercial proposition, the cost of the books with shipping is hardly efficient, and the printing quality not as good as would be seen on the iPad.

Now, anyone can make an e-book. It doesn't have to contain a hundred images. It might just have 15, and cover only a single subject, yet could be incredibly pleasing to the eye.

Even famous photographers often have difficulty getting new books out - and old books go out of print - or the printing isn't optimal - or the time to set up a book is prohibitive when you have to earn a living.

When the cost of a digital portfolio is measured in 10's of dollars almost anyone who enjoys photography can afford to gamble.

I get roughly $3 for each of my books sold. Given the publisher has to set up, print, and promote the book, I don't have issue with this, and there is still something very nice about holding a real book, but if the option is to not enjoy the images at all because the photographer didn't/couldn't make a book, well...

I wonder how much people would be willing to pay for an e-book or digital portfolio (really the same thing other than book implies more images).?

How much would you pay for a single image you especially like?


What if photographs were sold the same way music is. Itunes could sell Ansel Adams, 99 cents for one image. The concept sure has saved the music industry. Could this be the saviour of fine art photographers. In iTunes the price is fixed for a given resolution of sound. Doesn't matter whether you are U2 or Fred Bloggs, the customer pays the same. I have no idea how artists are paid and I dare say it's tiny, but what if there a way to distribute images so that the photographer got 25 cents for each image, and lets further say that there are millions of these high res iPads (or equivalent), and that people got used to buying images like they buy music, is it possible that a really nice image would sell multi thousands of copies and generate more than $100 a year, per great image, per photographer?

There are problems. The puppy images will continue to far outsell fine art work. The number of photographers is so large that there will be an enormous amount of 'ordinary' images, camouflaging the good work. But like with iTunes and Amazon, one will be able to look up recommendations and ratings and not just popularity. There will be even more opportunity to write about photography and blog about great images discovered.

As the music industry has discovered, make it easy enough to access the music you want (and only that music) and a viable market will exist.

Is it time for the 99 cent Edward Weston, or George Barr, or (place your name here)? 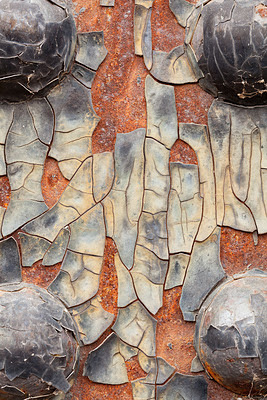 From the side of the turntable bridge. Shot with 90 mm. TS-E at its nearest focus - had diff. getting Helicon to blend for depth of field properly (those rivets are half round and so considerably closer to the camera. In the end I chose two of the images, one for the flat, the other for the tops of the rivets, and placed the rivet top image on top of the flat. I then used Transform - scale to adjust the size of the overlying image till they blended very closely. Then I masked the rivet top image black, and painted in white for the nearer parts of each rivet. No more ghosts and double images.

Not really sure what went wrong with Helicon. I had to scale the top image to 98.6% and I would have expected Helicon to handle that. In fact I went back and changed the preferences and retried the blend - even worse. Also tried the default settings - still not great. I'm sure there's a book out there that explains how to use Helicon to best advantage - time to do some reading.

The tilt and shift were irrelevant to the image - it's just a good 90 mm. lens close up - though hardly a macro lens. 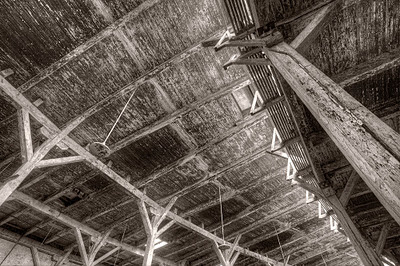 And two other images showing the outside and inside - more record shots than fine art.
Posted by George Barr at 11:29 pm 3 comments:

Another Late Image from Writing On Stone 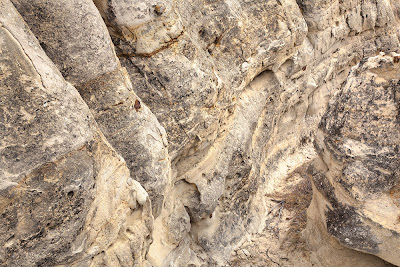 I worked on the image for quite some time, increasing contrast, darkening the left side, darkening the shadowed areas further, adding more local contrast with Akvis Enhancer, but then reining in the saturation with a black and white layer mostly masked and a reduction in contrast to bring back some of the subtlety of the image.


As it stands, one can hardly see that there is a huge boulder on the right entirely separate from the cliff face on the rest of the image, with a gulch between. The image would have looked more realistic had I adjusted tones to separate them, but I quite like this ambiguity. Whether I'll like it in a week or two of viewing the print remains to be seen.
Posted by George Barr at 9:51 pm 2 comments: 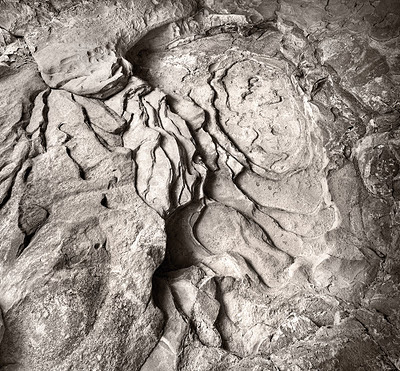 Was checking out some of the work at Photography Now and came across this photographer, Joakim Eskildsen, originally from Denmark. I found several wonderful images.

I see some Paul Strand in some of his portraits, but his use of colour is magnificent.
Posted by George Barr at 10:23 pm 1 comment: 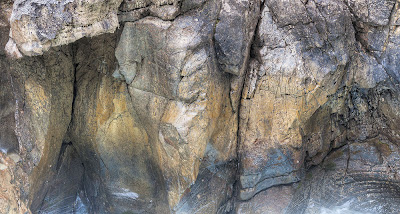