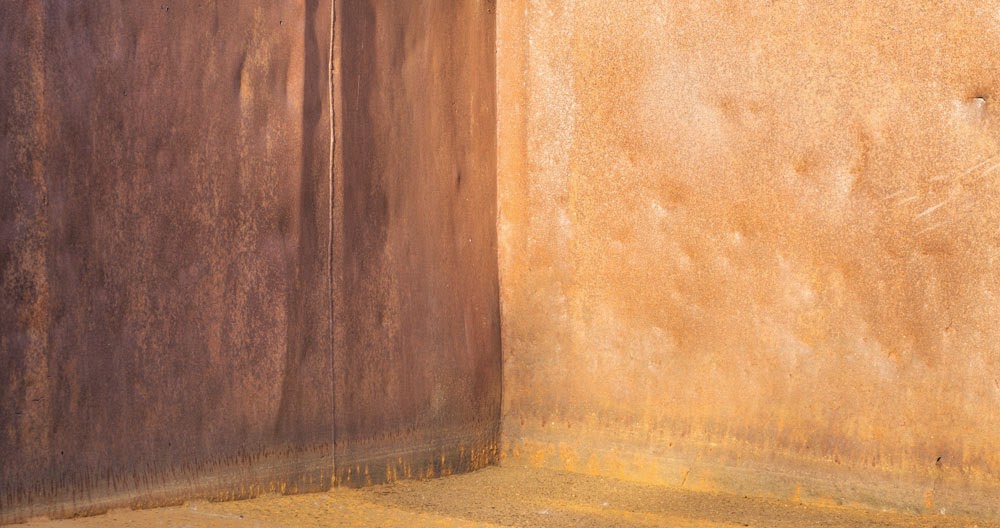 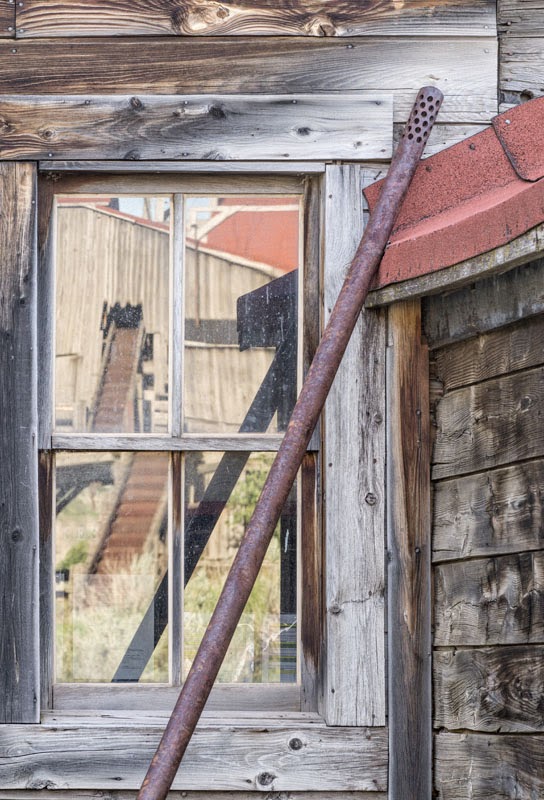 Nipped down to Drumheller yesterday, with plans to shoot the badlands but decided first to visit Atlas Coal Tipple, and ended up spending the rest of the day there. My Metabones Canon adapter failed (couldn't communicate or set the f stop). This was more than a little frustrating as it eliminated 3 of my 5 lenses, including my favourite 70-200, and close focusing (my extension tubes are Canon). This had been on the camera in Newfoundland when the previous A7r came off the tripod and fell six feet onto rocks.

The adapter looks fine but works only intermittently. I had fortunately decided at the last minute to take my A6000 kit with me and so used that for the rest of the day including these two images, both shot with the very small 55-210.

I occurs to me that I could have used it on the A7r but with the rear baffle still in place it only ups the pixels from aps-c size 15 mp to about 20 of the full 36 and you lose the quick focusing of the A6000 and 24 mp within the aps-c size, oh yeah, and IS too, though that didn't matter using the tripod. 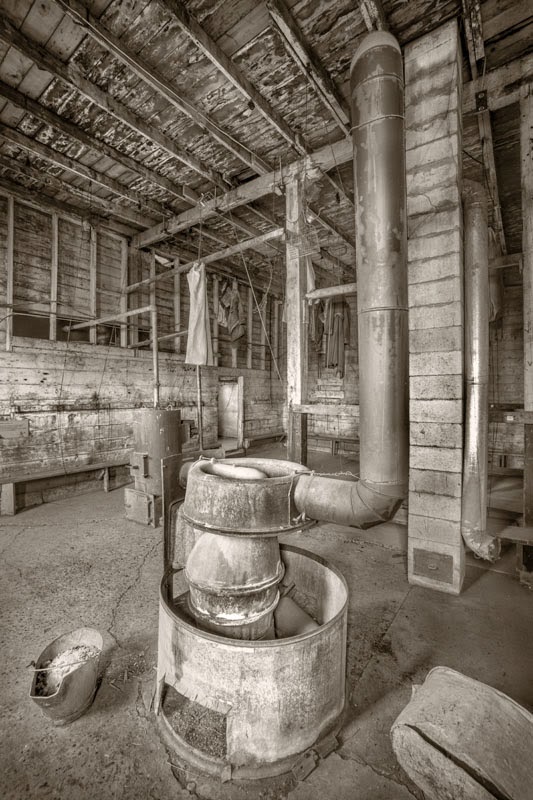 this image was from the washhouse, 10-18 at 10 mm., 30 second exposure at f14, considerable work done to even out the exposure, increase local contrast and give the image depth.
Posted by George Barr at 8:46 pm 1 comment:

A7r For Professional Use - Not Quite

I've had a chance to use the A7r more extensively and in a  variety of situations. There are many things I like about it - the EVF, and tilting LCD (though why camera manufacturers continue to think that we don't shoot vertically is really mind boggling.

1) taking 3 seconds to turn on - just not professional
2) often, one is unable to magnify shot images  - the same happens with the A6000 - clearly a software bug - fortunately not affecting the final image.
3) the shutter button isn't definite enough - not like ones on Canon cameras for example, where there is a definite tactile difference between half press and full - here it's a guessing game.
4) even breathing on the shutter button will cancel magnify view, making manual focus a pain, and sometimes I'd swear I didn't do anything to cause it to drop out.
5) formatting cards is buried in menus and can't be put in "mymenu" like on a Canon camera, or done by double button pushing as per Nikon D800e (I actually prefer the Canon My Menu system - less scary, more definite than the Nikon way and oddly, faster too.

Now, don't get me wrong, there are far more things to like than not - for example, using tilt lenses is a breeze with focus peaking.

I didn't find camera shutter shake to be a huge flaw - but I was using the battery grip. Likewise battery life was not a problem since the battery grip holds to batteries, but otherwise, you'd likely find yourself changing batteries at critical moments just a few times too often for comfort.  I did find the shutter noise to be an issue during my recent trip to Newfoundland.

In hindsight I should have used my Nikon equipment for the trip, selling it after if I still wanted a change. I'd thought the light weight and small size of the A7r would be ideal - but too often it wasn't the right camera - for people, in the helicopter, for quick grab shots, and for small size (after all with the Canon 70-200 plus adapter plus L bracket on the adapter, this is not small kit).

Now that I'm back home and not photographing whales and birds and musicians, it may well prove itself close to ideal, or close enough.
Posted by George Barr at 9:43 pm No comments: 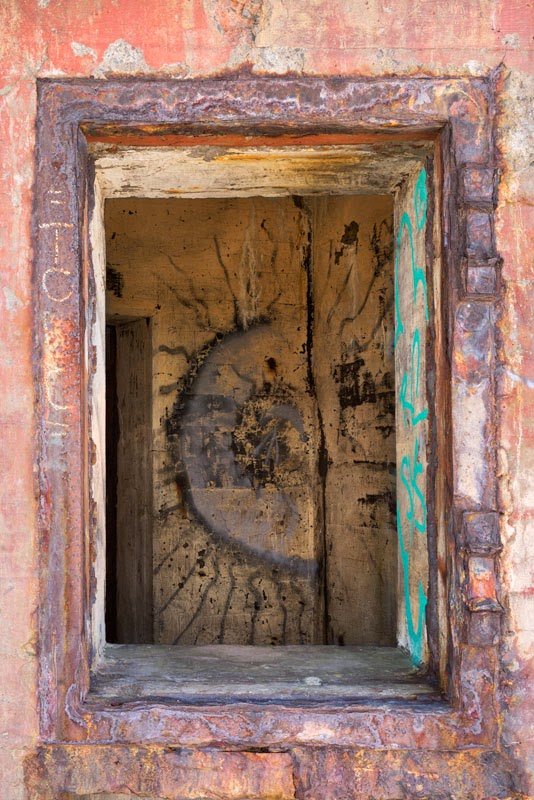 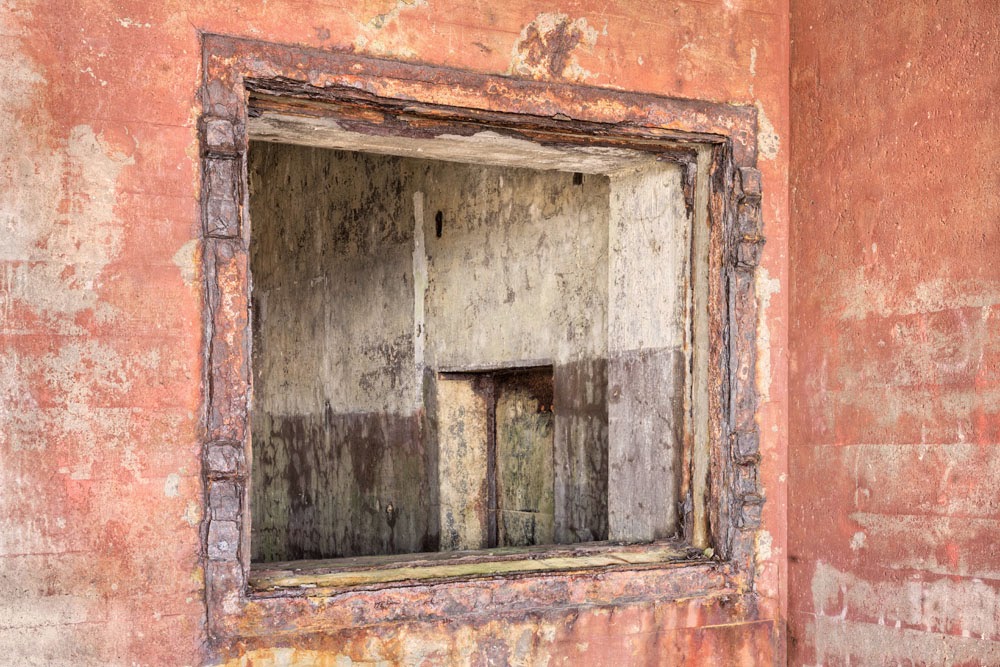 These images are from the old bunkers at Cape Spear, Newfoundland, about 25 minutes from St. John's. We had visited two weeks earlier and even in that short time, new graffiti had been added, complicating the photographing.  Both images were made with the 24 ts-e lens mounted on the A7r.

Even with careful viewfinder framing, I still needed to do some small Edit/Free Transform to get perspective correct for the print. This isn't a fault of the equipment, rather that tilt as little as one quarter of a degree is noticeable on a print, and not in a viewfinder of lcd, and not measurable with current leveling aids in digital cameras. I could have made colours and contrast pop in both images, but prefer the more pastel look shown here. 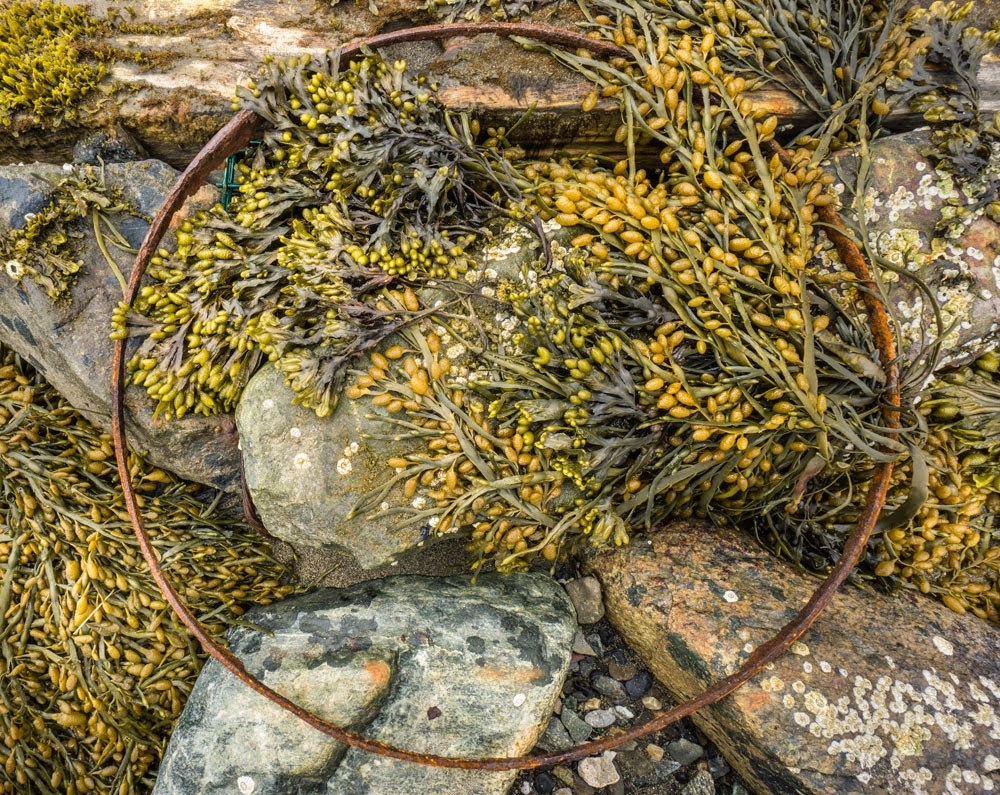 The first image is a recreation of the Viking houses at L'anse Aux Meadows. The second is an old fence on Fogo Island, the third a beach artifact at Woody Point, next to Gros Morne. The first was made with the A6000 and 55-210, the second with the A7r and 24 ts-e Canon lens shifted left and right and stitched, the third with the A6000 again, this time with the 10-18 IS hand held at 1/8 second. 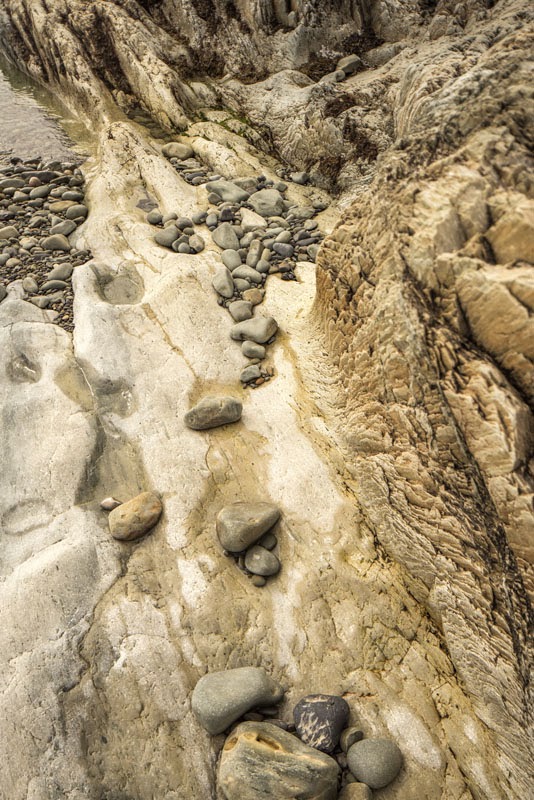 The fourth image is the A7r on Fogo Island, 24 mm. ts-e, tilted for nice fore to aft focus, but I forgot to check depth of field left to right and the right edge raised rocks are out of the plane of focus.
Posted by George Barr at 9:22 pm 2 comments: 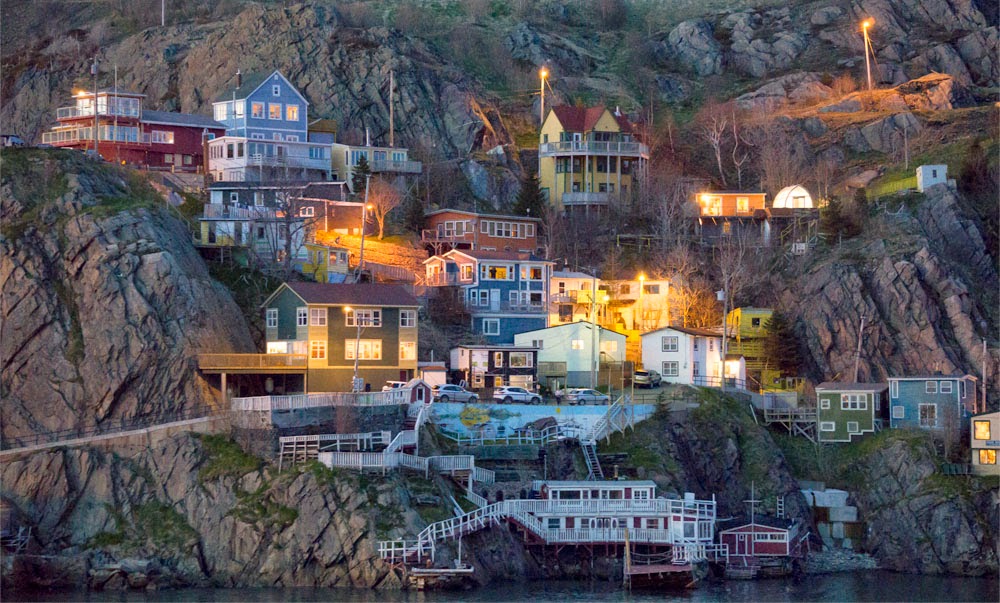 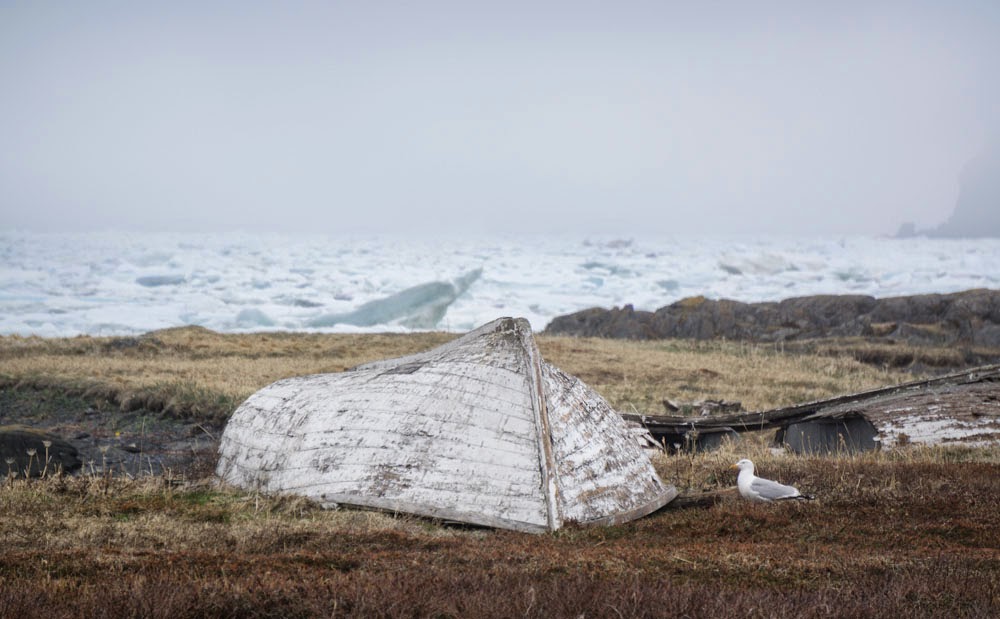 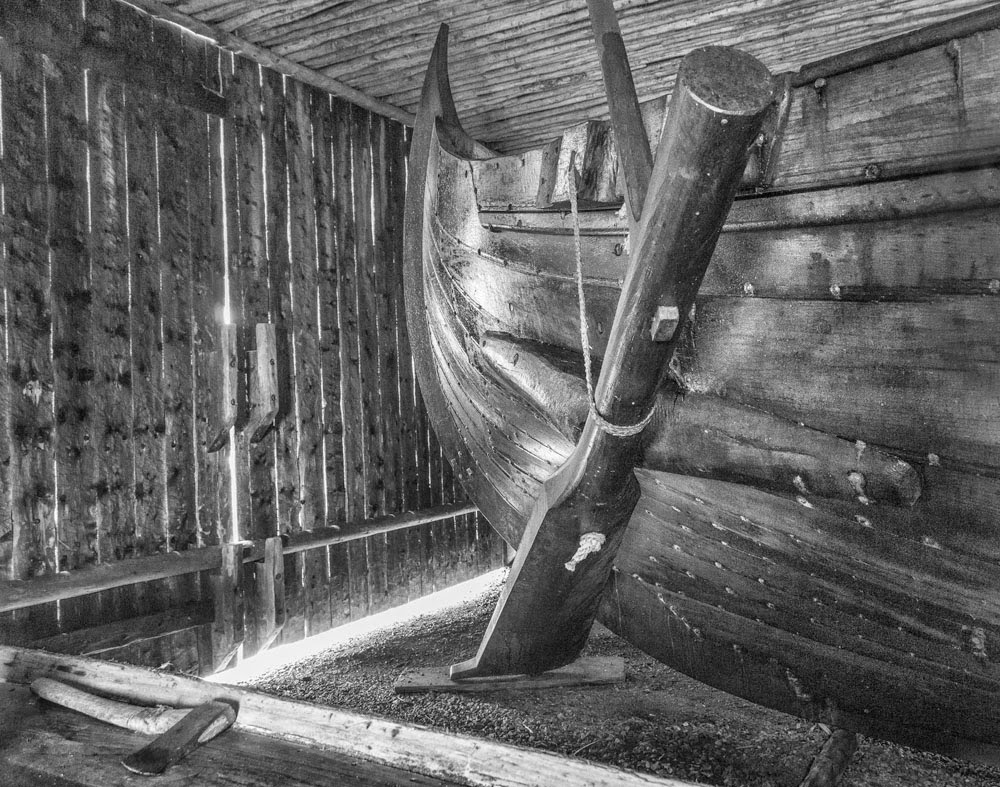 We are just back from two weeks in and around Newfoundland. The first image is as our cruise ship Sea Adventurer (passengers 118) left St. Johns. This is the area referred to as "The Battery". The ship was late in leaving, held up by customs having arrived from winter duty in Antarctic.

The second image is from L'anse Aux Meadows - the Viking settlement at the northern tip of Newfoundland. Keep in mind that pack ice in the background was solid, the wind was howling and the temperature hovering around freezing point - sure can see why they left after 10 years but still some 500 years before Columbus. We learned they may have headed south to modern New Brunswick.

The third image is of Snorri - a repilca Viking boat, named for the son  of Eric The Red, who settled in Newfoundland, after being kicked out of both Iceland and then Greenland for multiple murders. Charming but tough bugger! In 2000 the boat was sailed from Greenland to Newfoundland to commemorate the 1000'th ann. of the original trip.

All three images were made with my new A6000 - I'd fallen in love with the viewfinder - so much better than the Nex-7, and at low ISO, smoother more detailed images. With my 10-18, 16-70 and 55-210 kit, it made a small portable package for travelling and ended up being used a lot more than my A7r. I was very pleased with the A6000. No, it doesn't focus as well as a good dSLR, but decent, definitely.

I didn't have my tripod for the interior shots of Snorri but simply held the camera against a post as best I could, and with the amazing image stabilization of the 10-18, was able to make the shot.

I never would have guessed that IS would matter in such an ettreme wide angle, but repeatedly on this trip it proved helpful.

On Newfoundland itself, it was wonderful and we can't wait to return. Wild, friendly, beautiful. The ads for Newfoundland are all true.

Posted by George Barr at 5:14 pm No comments: