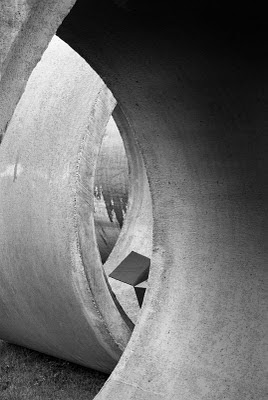 I was just thinking I should do more with my rust images, but after working on the book for months, the garden was sadly neglected. I repaired the wheelbarrow, flipped it over after replacing the wheel which was always going flat, and lo, rust, lots of rust, in interesting patterns.

After taking the picture, I hauled a couple of barrow loads of compost for  a new flower bed. Not a great photograph, but a nice one.
Posted by George Barr at 10:19 pm 2 comments:

As part of the new book project, I'm asking photographers to name the people they admire. More than one name was unknown to me. I had a look for Merg Ross and was delighted to find all manner of interesting images. In checking out the site, I see that he was a student of and friends with Brett Weston and one can certainly see Brett's influence in Merg's photography, but his images are definitely his own, very strongly designed and an interesting variety of subjects, well worth checking out.
Posted by George Barr at 5:33 pm 2 comments:

Toning In A Digital World

My persistent absence from posting is of course because I'm hard at work on the next book, but it's months away (and longer if I don't keep my nose to the grindstone). For the book, which is about photographs by other people, I have had all manner of methods of delivering images to me, from digital files ready for the book, sized and everything, to prints, to unedited scans from transparencies and colour negatives as well as monochrome. Some of the photographers print on silver, others platinum. So, reproducing their work as closely as possible has not been a simple task.


Dennis Mecham sent a beautiful silver print, monochrome and not toned (or so I first thought). I scanned the print for him and to check on quality, made a print from the scan. Wow, his print had a lot of colour compared to the totally neutral inkjet print from my 3800.

I noted that the blacks were black, but the midtones warm, almost pinkish rather than sepia, yet so subtle I hadn't even noticed it till I made the comparison print.

Someone had the suggestion on the net that a good way to tone images is to forget quadtones, stay in RGB and do the following. I regret not being able to credit the photographer but I dare say the idea has multiple sources anyway. Here it is:

Add a new fill layer from the layers menu in Photoshop. In the layers palette, set this layer to colour - thus applying colour information to the previous image layer but not luminance, thus tinting the image.

In doing this you are asked for the colour of the fill layer and you specify the hue you want. For my first effort, I chose R 208, G 201 and B 185. I later reddened it a bit, making the toning look more pink than orange by moving the colour slider on the right downwards when setting colour. (you can change the colour by double clicking on the layer icon for that layer in the layers palette, just like bringing back up the controls for any adjustment layer).

Now, here's the bit that I found helpful in the above project.

1) roughly set the opacity of the fill layer so that the middle and lighter tones in the image look right.

2) double click on the layer (to the right of the layer name) and you get up the blending window. Here you can change all manner of blending. What I wanted was neutral blacks and a gradual switch from toned in the lighter colours to neutral. I did this by using the underlying image slider at the bottom of the window. You will find a split black mark on the underneath of the slider. Holding down the option key, I dragged the right half of the dark slider nearly all the way to the right. This had the effect of determining which parts of the underying image would have the toning effect applied by the fill layer.

Essentially in pure black I had no toning, and a gradual switch to full toning where the split marker had moved to on the left.

Now, with the saturation of the fill layer and the controls of the blending window, I could get the toning close to perfect on screen. A few prints later, I not only had the colours of the two prints, one digital, one silver, matching extremely closely, I had the prints matching for luminance as well.

I did notice one phenomenon. Though I don't worry about metamerism these days (digital prints changing colour in different light sources), I did note that the strength of the toning to the two prints changed in relation to each other as I moved from flourescent to north light. It isn't a problem, just something to note. Anyway, the two prints are on their way back to Dennis.

Try this method of toning your black and white images, I think you will like it.
Posted by George Barr at 5:35 pm 2 comments: