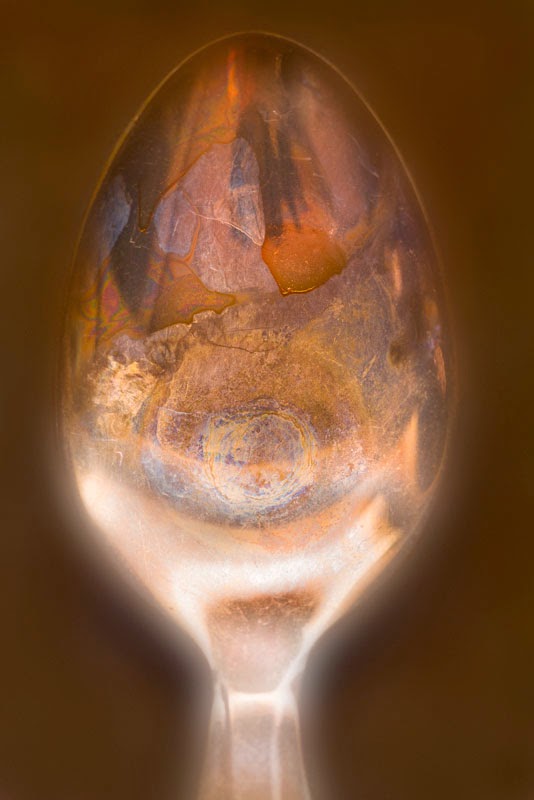 Happened to notice the tarnish on this tea spoon, so parked it in the cupboard for later. I photographed it with the A7r, 90 mm. tse, tilted and with a 30 mm. extension tube. The whole thing vibrated in the wind, and I was pushing it with the 2 second self timer to settle that quickly and not be influenced by shutter shake but it seemed to work out fine - only the centre is in focus. I shot two images at different exposures and blended them manually to avoid the washout of highlights at the base of the spoon.

The background was blurred with a gaussian blur on a separate layer, then masked back, then I did the same again, only using lighten so only the lighter pixels would smear, and masked much of that from the centre of the image.
Posted by George Barr at 12:04 am 1 comment:

I had an interesting opportunity on the weekend at the local model train show (where we help kids build cardboard train stations as well as give lectures on basic model railroading). There's lots of opportunity to photograph the fellows helping cute kids construct the stations. On Saturday I brought the A7r, 55 FE 1.8, and the 70-200 Canon L IS. Interestingly the latter worked better than the former, using manual focus to get eyelashes sharp. With the wider angle of the 55 and very poor autofocus.  I hadn`t expected greatness, but considering the indoor soccer centre was decently bright, was more than disappointed with the number of failures (about 3/4 of the images).

So the next day I came with my Nikon D800E and 70-200 f4 lens and autofocused without problem and nailed the eyelashes 3/4 of the time which I thought very reasonable. When it came time to actually edit the images, though, shooting at ISO 6400 (ok, maybe it was darker than I realized but kids move fast) and wide open or at most f5.6, image quality definitely suffered. There isn't a fix for this currently - just a fact of life. The problem was less one of ISO than depth of field.

Now, the real reason for this 'test' was to see how the A7r would handle indoors photographing artists and musicians (part of our holiday) and the bad news is, NOT WELL.

The A7r would be absolutely fine for formal portraits, less fine for casual people pictures and hopeless for photographing indoor soccer (or equivalent).

Interestingly, I also had a particular model mine I wanted to photograph on Sunday so brought my tripod for the D800e - and after a couple of weeks with the A7r, what a pain using the D800. The viewfinder was dim. I switched to live view and had to put up with the terrible image on the lcd, swimming aaround, even after I turned of IS, and of approximately 200K visual information, vs. the 2.4 meg of information in the Sony Viewfinder.

I'm going to love the A7r for my landscape and industrial work.

I'm going to be interested to see how the A6000 does when it gets properly tested as using the same lenses and at 24 MP, it might be all I really need for the weekend's work in which case I can get rid of the Nikon.

My casual impression (looking at images on screen at 100%) is that shutter shake on the A7r with the battery grip is not a significant issue, and the bulk of the battery grip still makes the camera smaller and lighter than the D800e without battery grip.

Once again I have to say I was impressed with the 10-18 on the A7r - would I recommend someone deliberately run out and buy one for the A7r - NO, but if you have one already, for sure - and I'm not going to carry a separate ultrawide.

There's lots of talk on the net about the 10-18 covering all of the full frame sensor of the A7r - with examples showing distortion and poor resolution at the corners. I went out to the garden yesterday and made an image, at 16 mm., no vignetting but definite blurring along the far sides. I did some checking and cropping and bottom line is if one trims the image to square, resolution is superb to the corners, this on a 24 inch square print.inspected from 8 inches away.

My intention to carry a large and heavy ultrawide is definitely on hold for now. Too bad the A7r can't be cropped in camera to square - now that's a firmware update I'd pay for, and maybe 4X5 ratio with this lens.

The widest view combined with a reasonable number of pixels is a 2:3 crop of 22 megapixels at 12 mm.

Given the small size and extremely light weight of the 10-18 - it will make an ideal travel lens for me this summer when I go to Newfoundland.

The Canon 70-200 L IS lens works great on magnified manual focus, and the IS is great - very sharp pictures at 1/60 and 200 mm. - perhaps that battery grip is helping shutter shake as much as some people say - anyway - works for me.

I have the 55 FE 1.8 native lens, and now just need something between a cropped 12 which is probably about 15 mm. equivalent, and the 55.

The sensible thing is probably the native 35 f2.8 since I don't need another fast lens, and perhaps a 24. I might lug the 24 Tse, but it's quite a weight on the A7r.

Anyway, in the mean time I will have no hesitation to use the 10-18 on serious landscape work.
Posted by George Barr at 10:13 pm No comments: 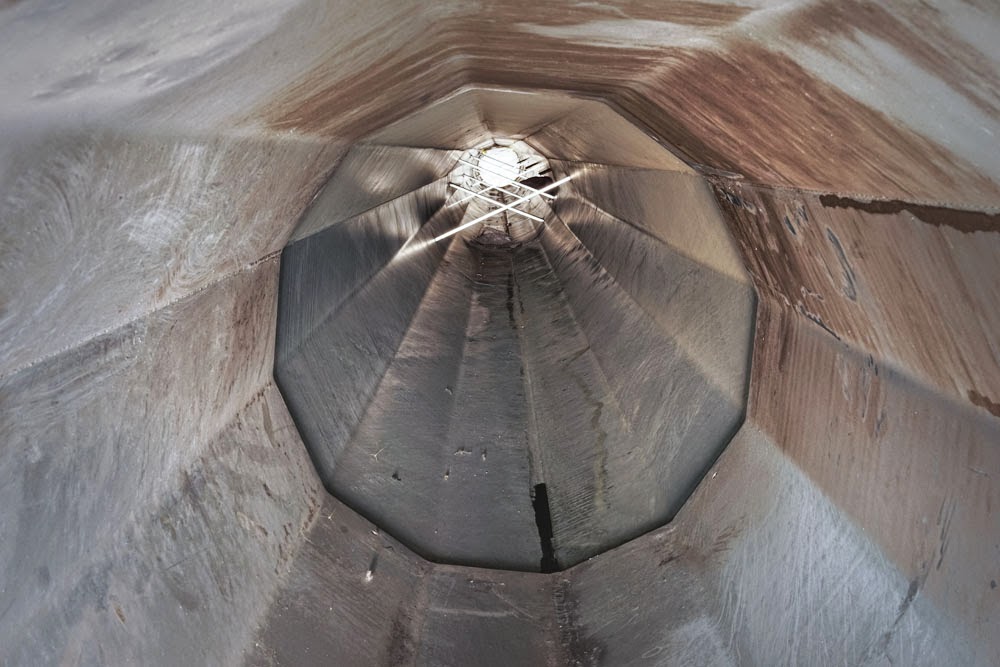 After considerable debate and a lot more research, I decided to purchase the Sony A7r and 55 mm. lens and battery grip. I didn't yet have an L plate (or any plate) for the camera but I rested it on top of the tripod and held it lightly in place while making this image. I was inside the pole that was lying on the ground waiting for installation. The light at the other end is in fact simply reflection from the end I'd crawled into. I could walk stooped over it was so big.

I'll be commenting on the A7r experience in the next few weeks as I get used to it - things like how big a deal is shutter shake, does the battery grip solve that problem, what about the compressed raw files and how does the camera handle. Is autofocus fast enough, and for what, and what about other lenses on the camera?

I then have to make the decision on what to do with the Nikon equipment, some of which at least will need to be sold to pay off the A7r.

1) the camera is a delight to use.
2) I wish the image magnify button was somewhere not next to my eye and glasses.
3) images at 100% look crunchy - def. very artificial compared to the images with the D800e.
4) Live view is infinitely better than on the Nikon, probably the single biggest reason for going ahead with the purchase.