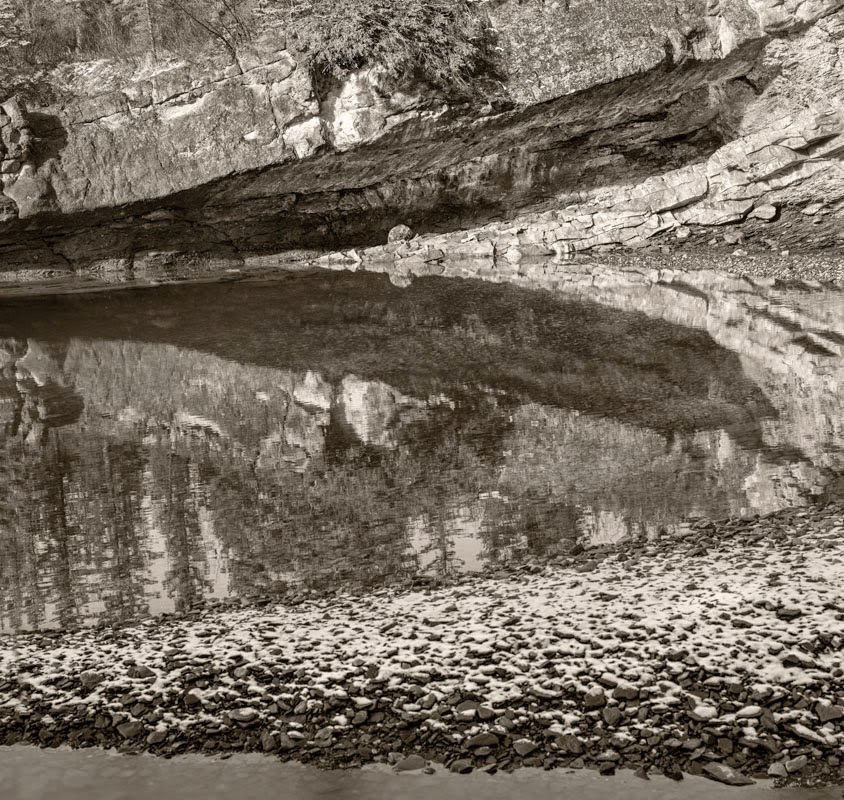 This is a two image stitch, then cropped a bit off the top and bottom, and slightly at the sides. The light rocks have been tamed, the shadowed rock opened a bit, some 50/100/0 unsharp mask applied, and then the image toned using my add a solid layer, set blend to colour.
Posted by George Barr at 4:35 pm 1 comment:

I photographed here last summer, and today Ken and I went back out. Forecast was for freezing rain so we were not sure the trip would fly, but as we left town, there was even a little sun breaking through on the horizon.

As we went west the clouds built up and they reached down to the ground and had those streaks in them that tell you it's wet somewhere. We actually hit snow as we pulled onto Highway 40 for Kananaskis Park, but with winter tires and a bit of care, we pulled off for the river.

I put on some studded overshoes and had no issues climbing around on sloped rocks, while Ken stepped gingerly without, but neither of us fell.

We had a good three hours photographing - my endurance is improving leaps and bounds compared to a few weeks ago when after an hour I had to sit down or fall down - so nice. I could have done a variation on the shot made last summer but instead concentrated on the rock formations across the river, and also behind and above me as I stood on river's edge.

Both images are stitches. The first is with the 300 mm. lens at f22 (and the foreground isn't sharp) but I figured it wouldn't really matter given the water was moving anyway. The second image is with the 120. By the time the stitching is completed, the irregular edges are trimmed and then there is some compositional cropping (very modest), we're looking at about 120 megapixels.  Interestingly, the first image looks better small, while the second is best full screen. You can click on either to see them larger (1000 pixels wide). 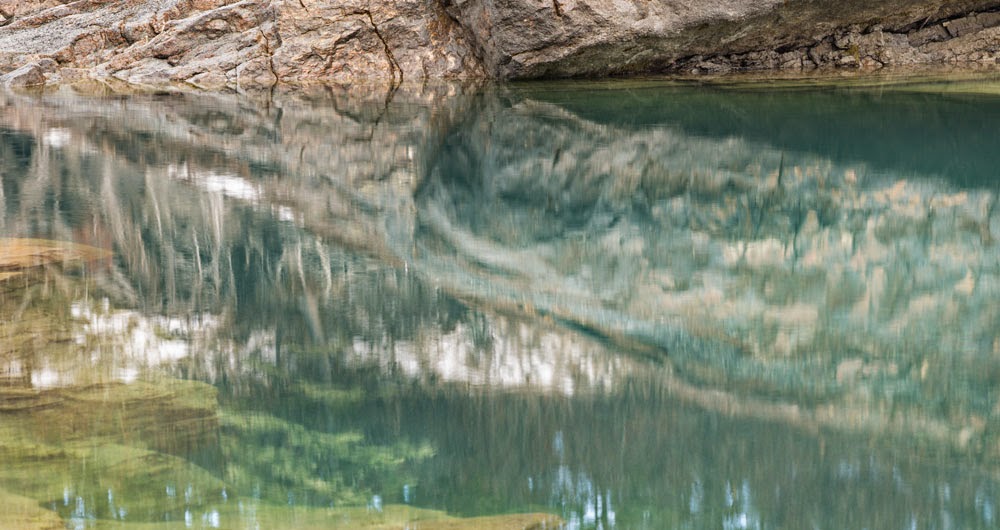 Stand by for some more images from the shoot in the next couple of days, and I think there is more to be made of the location in a future trip. I must sometime post an image of the white water when the dam is open and the kayakers find it lives up to its name - whole n'other setup!
Posted by George Barr at 9:29 pm 2 comments:

We had four days in Banff before I started back at work last week, half time for now. I took the gondola to the top of Sulphur mountain and photographed with the Pentax, aware that with such a well known location and limited chance to move I wasn't going to shoot anything original, but it was fun, and my first day shooting outdoors since the surgery - I even hiked (slowly) over to the weather station and back to find some other views.

I don't know what peak this is. I made the photograph with the Pentax mounted vertically, and three images swung horizontally. It was an interesting shooting situation. Except for right next to the gondola building where there is a concrete pad, all of the boardwalk is very bouncy and the tripod shakes with every footstep, even ones 40 feet way in some situations.

This was a high enough shutter speed to deal with shutter shake (exc. when people were nearby) and also to 'stop' the air movement. The result is an image that is reasonably sharp, considering. Below is a 100% crop. The full size print is 62 inches wide at 300 dpi.