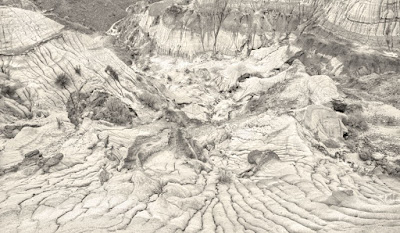 31 years I have been visiting Dinosaur Provincial Park and have yet to get bored with it. Time moves on though and this time I had to contend with mountain bikes instead of boy scouts. Still, there was enough left to satisfy me.
Posted by George Barr at 2:27 pm No comments:

It's been a couple of years since the last visit - and I always enjoy exploring. We'd hoped for sunset light but this was as much as we got and this was weak sun through cloud, and even that disappeared shortly after making this image. It's a stitch, using the 120 macro on my Pentax 645Z.

I realized that one reason I like to stitch is that the image is larger on the LCD, and composing carefully is more successful. I wasn't sure where to start and end the image so went over, using seven vertical images - but in the end trimming down to about four - for a 130 megapixel image file.

There's a bit of colour in the foreground plant material but in the end it was more distracting than helpful and I was not surprised to find the black and white image more sucessful.

The left hand side of the image is in shade, the right in weak sun, so there's a fair bit of editing to balance things, including some curves layers with the top right corner shifted left, as well as some Akvis Enhancer selectively applied, more to the background cliff face than to the columns.
Posted by George Barr at 10:11 pm No comments: