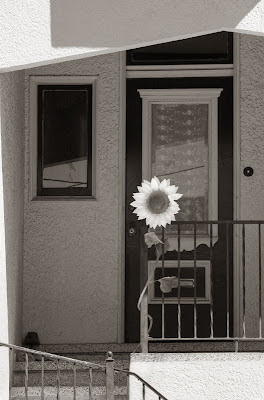 I have been thinking about my experience in San Francisco, not so much about teaching the workshop but about the walk abouts we scheduled as part of the workshop. While spending much of the time helping others see, I was on the prowl for images too.

1) I saw all sorts of images in this foreign city (to me) that I don't see at home, and

2) In San Francisco, I had absolutely no hesitation in asking anyone if I could take their picture, where here I'd feel foolish and shy.

It's all very well saying that San Francisco was full of lovely 1890's houses well preserved and beautifully painted - but I saw images in ordinary houses, like the one above, and in routine details. At home, I am so used to seeing these and accepting them as background to my life, I don't in fact see them as subject matter.

As a tourist, I had no issue with asking to take a picture of someone. I suppose it's that if I made a fool of myself I wouldn't be around for long - but that certainly isn't what I was thinking - it just seemed like as someone visiting the city, I could play the tourist and happily snap away.

Calgary has a population of 1 million, so it isn't likely I'd meet someone I know while out shooting, but somehow it feels more intrusive at home, turning on one's own.

Does anyone else find that being elsewhere changes the way you see and photograph?
Posted by George Barr at 2:41 am

George, I wonder if the fact that you were teaching at the time helped you to overcome the trepidation of asking strangers to pose for you. I have found, on the few occasions I've worked with young photographers, that I'm much more apt to be overtly outgoing than if I were working solo.

Absolutely! Living in the suburbs of Chicago, I find that even traveling to the city, I am more inclined to photograpy someone without feeling self concious about doing so. I've found it even more so when out shooting with a group on a dayshoot. So I guess the trick is to think like a tourist when out shooting....easier said than done on home turf.

Hi, I agree with George. Being in a foreign place somehow changes my perspective and my attitude. I too discover more things to photograph. Till now I've thought that the reason is my expectation that I will be somewhere as a tourist and that a tourist takes pictures. Although I'd like to think that I take "more" than just tourist photographs. Also I'm more relaxed, wondering around without a purpose and without specific tasks -- go shopping, take care of this or that.

And on the the topic of photographing people, on a recent trip I photographed almost exclusively people, although in Germany I never feel the urge to do so: see here.

Good points all. Being in a group, even though we were often blocks apart probably helped my confidence, and being the instructor probably made me ignore normal anxieties about shooting. Definitely being 'elsewhere' seems to be important.

Important point that even an experienced photographer does 'see better' when in foreign territory. The same thing happens to me all too often: I am 'seeing' so many more things when I am (even in a hurry) on a business trip where I have to steal some early morning hours for photography, than I see at home. I tried and still try to overcome this attitude.
My theory for this is that in known territory the brain much faster chimes in and sorts the subjects in your field of vision into pre-fabricated drawers, effectively interrupting that line of associations of form, color, point-of-interest, composition so that I do not see long enough but too soon categorize and stop with that.
If this theory is right then it should be possible to overcome it by training.
Alas, until now I haven't succeeded.

I just started rereading Freeman Patterson's "Photography and the Art of Seeing". He starts off the book with this very dilemma, not 'seeing' what is familiar. He used the example of going on vacation for two weeks and when you arrive back home you notice things you hadn't 'seen' before. But wait a few days and you won't 'see' them as the familiarity returns.

Me, too.
I have stagnated lately but a trip to the coast gave me all kinds of photos I like. Now that I'm home--nothing.