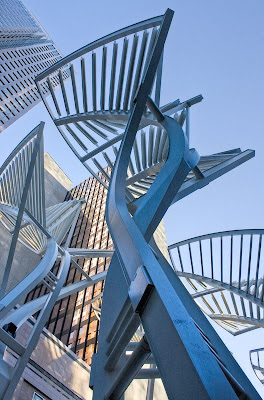 I photographed this sculpture downtown Calgary this afternoon. It raises the whole issue of whether one can take any artistic credit for photographing something someone else made as a piece of art - whether sculpture as in this case, or architecture, graffiti or even an ornamental garden.

I can tell myself that the creator of this sculpture did not in fact envision their work being viewed from this particular angle, with today's lighting and the surrounding buildings looking this way - but I don't really know that - for all I know, this is exactly the spot they stood, looking up and envisioning their future work. Granted I framed it as well as positioning myself.

I find photographing sculpture quite challenging and so it appeals to me. 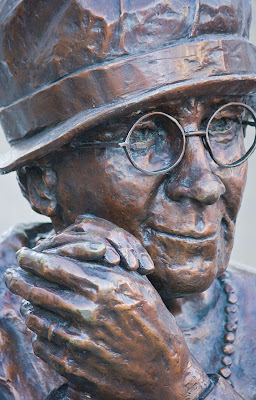 This image is simply a closeup of the work done by the sculptor - I contributed almost nothing to the image. Every curve, bump, surface and reflection was the work of the sculptor.

If someone photographs graffiti and frames it the same way the painter did thus reproducing it almost exactly as it was created, is the photograph a valid piece of art?

Difficult questions . What if there had been no art in the first image, just the buildings - does that make a difference?

While shooting a series of images working towards the image I showed you at the top, along came three other photographers who also photographed the sculpture. I watched as they photographed the same scene. They all took pictures but did not "work the scene". It might be that they were really "hot" photographers, instantly understanding the scene and able to quickly find the best spot to photograph from. I know I certainly was unable to do that. I tried a number of positions, refining each, yet there are so many parts to the scene, so many corners and lines and diagonals that I never did feel that I had the "best" result. I like what I got here but Still wonder if I did the best possible job.

For example, the large grid overlaps the tall building on the left - perhaps I could have found a position from which it didn't and that might have resulted in a better picture. I was using my 40D and 18-55IS at 18 mm. What would have been my choice had that not been the widest angle I could shoot at?

Still, at some point you have to say, I did my best, come and behold it - lumps and all. 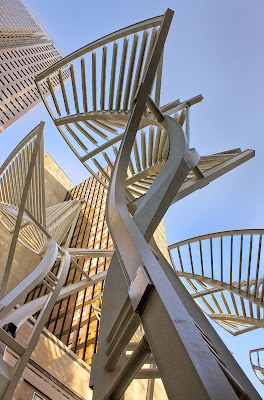 In this repeat of the first image - I used the cream colour of the sculpture to white balance the image. Certainly this looks a lot more like what I saw - although if one were to colour balance for the sunlit buildings, the top image is in fact the more accurate, this city canyon being lit only by bright blue sky. So which is the more "natural", or the more correct (which isn't necessarily the same thing)?

I prefer the top image - I like the unifying blue theme - I like the image - I accept that it is not all mine - that the sculptor bears much of the responsibility for the image - but I'd like to think they would be pleased with what I have captured of their work - yes, I will display the image in the future, for whatever it's worth.
Posted by George Barr at 7:40 pm

Worth a lot. Your photograph of this art, can be sent out and seen by millions. the art itself can only be appreciated by those able to come to it.
as for the other photographers.. lol I was once told that you can line up a bunch of photographers to take a picture of the same thing, at the same time and every image will be different.. I wonder if that is true?

Superb composition! Just lovely. My analogy to illustrate what my own position is regarding what the photographer brings to the artistic equation (in photographing existing works): I use the mathematical programming language Mathematica almost daily in my "day" job. It is a powerhouse of functions and graphgical primitives that it has taken a cadre of hundreds of dedicated researchers over two decades of effort to produce. When I (and others) "use it" can we take any credit at all for our "discoveries"? The answer is clearly a resounding "YES" precisely because none of those dedicated researchers can, even in principle, foresee all possible ramifications (angles/compositions/...) of the functions they've included. Art consists fundamentally in discovering something new; the primitive building blocks of that something is - in photography - the set of all the visual primitives we see with our cameras. No architect or builder can foresee all possible compositions of their work; they supply us photographers with the raw visual playground for us to do our thing ;-) And, again, truly a wonderful composition. I found myself looking at it again and again. Just perfect.

Excellent thinking. I have been wondering about this expecially related to architecture, and have had a bit of a quilty conscience of "using" works made by others as subject for photography. Now it is easier to focus on the photography...

Your post was interesting. I believe that if it is a famous, copyrighted piece, you be prevented from publishing photos of the work. I seem to recall that there is a famous Torrey pine tree in the Monterrey area that has strictures placed on images. I agree that the extent that you put yourself, your art, into the image is important. And of course, wherever possible, it is good to identify the artwork and the original artist.

Hi George, I just found your blog, and I bought your book. I photograph (on two separate tracks - animals & landscape), collect, and read about it all. On your next book, you asked for comments or ideas. There is something that I, and a lot of (gallery-sold) fine art photographers take for granted ... that I have hardly ever seen in photography books. It is an analysis of the "intent" of studying a subject photographically; of using the medium to express ones feelings ... usually love ... about a subject.

In other words, it is not about the various styles of composition ... or other techniques that are often dissected in books ... it is about the subject, and expressing your feelings about that subject through one's use of those techniques.

But in presenting the craft, writers help lead a photographer toward using a technique for its own sake ... and not for the real reason it is presented, simply as a tool to be picked up and used as needed.

A "subject" is usually covered or contained in a single portfolio. It is a passion, an obsession. All of the study and practice and experience of photography is for the purpose of better expressing one's feelings about a particular subject(s). It is the subject that is paramount ... not the craft of photographing it. If I were a writer, I would write about that subject. Or if a painter, I would paint it. Or a poet, etc. But I photograph, so I photograph it ... with the same emotion and passion and study as the writer, etc.

As I said, I am not a writer. If this makes sense to you, THAT is what I would like to see in any book about photography. (I suppose you would call it a "slant." )

As an example of my comment, NOT about the content or marketing of his work, Ansel expressed his obsession over Yosemite through photography. In his formative years, his feeling and passion about the grandeur of Yosemite was there ... though his technique of expression would noticeably improve with years of practice.

Most photo books lead the photographer to practice isolated techniques. My suggestion is that they be lead to feel, to have passion for the subject, Then all technique is filtered through that subject, to better express one's feelings about it.

Does that make sense?