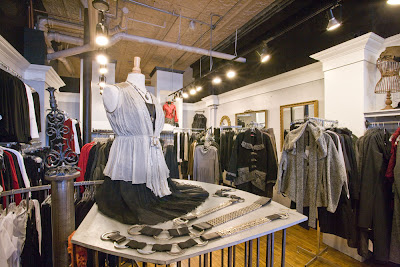 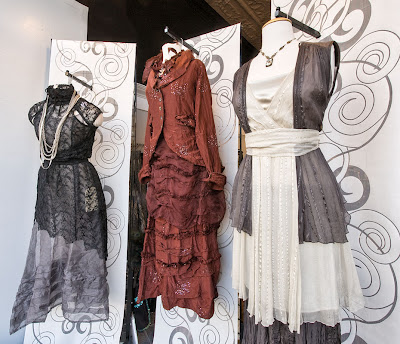 I had thought to start a series of images shot in Inglewood, an older, artsy, crafty neighbourhood in Calgary. One of my patients owns a store there and it seemed a place to start. I expected old and antique and sort of general store but in fact she owns a clothing store and I ended up shooting her window for her as well as interiors and her staff dressed in some of the outfits, hardly what I am experienced in.

I made a couple of screwups - first, I didn't clean the lens on my 17-40 and the number of flare spots from all the track lighting - well, fixing that kept me busy this afternoon. I don't even own a flash so fill flash is a foreign language - but if I'm to do this again, I might just have to learn. I solved her problem with photographing her window display (too many reflections through the glass) by parking the tripod right in the corner of the window, leveling the head, then shooting three images with at 17 mm. for later stitching.

I plain forgot to use the nodal point rotator so alignment of the images was problematic - fortunately fixable in Photoshop.

I don't have model releases so won't post any of the people shots but above are a couple of shots from the store itself.

I actually had a lot of fun doing it. It's interesting to be on the spot for coming up with some creative ideas.

If I'm to ever do this again, I'm going to have to read up on handling models - because I'm not much above the "Say Cheese!" level - never had to direct a rock or a piece of steel.
Posted by George Barr at 12:38 am