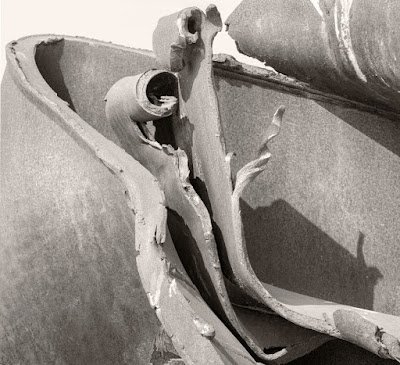 The local military museum has a memorial to the lives lost on 9/11, consisting of a single I beam, with twisted ends, part of the collapsed building. I had mixed feelings about photographing it, but in the end decided that anything that helps us remember can't be a bad thing, and I'm not in any way trying to profit from my efforts, or distort the story.

I think I might reshoot the second image wide open so that the background is blurred, more in keeping with the first image. Also, though I was careful in placing my camera to not overlap the almost touching pieces at the top of the image, they feel crowded and a greater space between would work better.

I like the shadow in the second image, almost as if we were seeing the ghost of the towers.
Posted by George Barr at 10:25 am