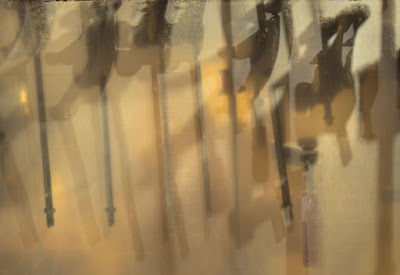 I've often thought the clamps in the window looked interesting, veiled by the sheet of poly never removed after I insulated that wall of the garage. Tonight the glow seemed especially attractive. I moved one clamp to fill a gap, but otherwise shot what I saw, not even moving away from the line beween house door and window where I saw the scene.

I did remove some dust spots from the image, literally dust on the poly, not like the old days of dust on the negative. I darkened the right lower corner, lightened the left side to balance the light but otherwise it's a pretty straight shot.

I know it's thought to be lazy to use a zoom to replace moving back and forth, but it sure does allow for careful framing of an image. The original shot did include a sliver of window frame, just to be sure I didn't miss any of the actual view.

I found my Manfrotto 410 modified head to be very handy in helping get that framing perfect. I recently modified it with the Hejnar Arca adapter plate, a RRS Arca Clamp, and of course added the RRS bottom plate to the camera. Though I did purchase the L bracket, I did remove the side part so it wouldn't interfere with use of the full range of movement of the LCD screen.

As the Manfrotto head flips over for vertical compositions, and given the relative weights of tripod, head and Olympus, I don't think I'm compromising steadiness to a significant degree by not balancing the vertical camera exactly over the axis of the tripod.
Posted by George Barr at 10:10 pm