I had been frustrated with the quality of my prints, especially on some papers - great on Harman FBAL gloss, quite far off in the bottom half of the tones with Enhanced Matte, despite using the proper profiles.

I decided to pick up a ColorMunki - even if it didn't work out for printer profiling, I hoped it would do a decent job on the monitor.

The first thing it did was measure the room brightness and announce that even though I didn't have the monitor anywhere near the top of the brightness range, it was WAY too bright. Now it's set less than half way to brightest (any further dark and I'd need a candle). Other than that, not a lot changed in the monitor profiling before and after as shown in the ColorMunki software - better skin tones - more pink and less yellow. Anyway, on to the printer profiling. Complete disaster. First round, second round, third round, with considerable reading on the net to find out what I was doing wrong. It wasn't whether I used perceptual with or without black point compensation, it didn't matter if I used relative colorometric, all were awful. Colour management was off as requested, I was getting frustrated.

On the fourth attempt, I found a youtube video on the colormunki by Oliver Neilsen. He pointed out that the colormatching setting in the print dialog box was critical. In photoshop, when you select no colour controls in the second print dialog, it overrides color matching, but when you print the test prints from Colormunki, it doesn't and you have to manually change the setting from colorsync to Epson (or other vendor if dif. printer).

The printed sheets looked hugely different - much darker and more saturated colours. The resultant profile is miles better than the Epson provided profile for Enhanced Matte (my standard proofing paper).

Why x-rite didn't control this (Photoshop did) or at the very least mention it in their help, I don't know. Why wasn't it mentioned in the dozen articles I read about problems with Colormunki?

Anyway, thanks to Oliver, I now have the best color matching between monitor and print I have ever had.

I will have to test with a variety of prints and with various papers before I can give an unlimited endorsement to the Colormunki - but now that I have the problems out of the way, I am very impressed. 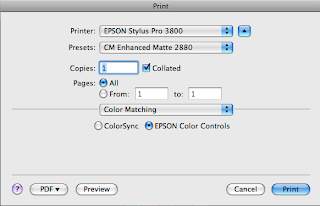 when you print the test image from ColorMunki, you need the settings both above and below: 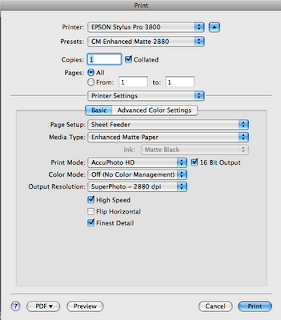 I don't really know if 2880 makes a difference on enhanced matte - now that I have the colour right, that will be a reasonable thing to find out - with a different profile of course.
High speed deposits ink while the head travels both to AND fro, and with modern printers doesn't seen to be an issue. In theory, were there play in the head or belts, you'd want to do all your printing in one direction but test so far have not convinced me there is a need to take almost twice as long to print.
I'll update you on my experience with the ColorMunki as I gain more experience with the new profile and work with other papers.
Posted by George Barr at 12:48 am