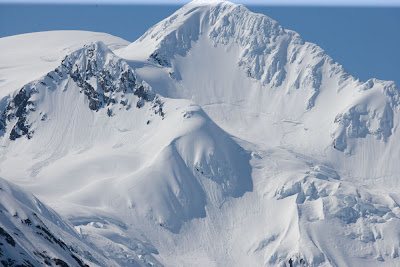 Some time ago I noticed that on a series of images, there was a lighter band across the top of horizontal images. The actual image information was there and with effort it could be burned down to match the rest of the print, but it was odd. Not only that, but it had a poorly defined edge to it and although almost horizontal, the line cut into the image wasn't perfectly square. It didn't seem like sensor problems nor firmware. It happened again on my recent cruise and I woke this morning with a possible answer I was able to confirm - it only happens when I use auto exposure. As I normally work with tripod and manual exposure, less than 1% of my images are done in 'program' mode or Tv or Av mode.

I had wondered at first if it might be related to the lens but I can see the same problem with the 70-200 and even found it on one 24-70 image.

I'm going to contact Canon and see if I can get it repaired. If I can't it isn't the end of the world except for one thing - at some point I will likely replace the camera and selling it with this flaw would be problematic.

I wonder if there is something that sticks up into the image area to meter for auto exposure and which isn't quite folding down before the exposure. I don't know enough about the workings of the camera to know if this is even possible and it doesn't explain why the metering works in manual mode. I'll be calling Canon tomorrow for advice.
Posted by George Barr at 10:06 pm

I had a very similar problem and it turned out to be a faulty shutter. The cost of repair (by Canon in the UK) was around £200.

ofer beat me to it. I would guess a shutter problem. Maybe aggravated by cold. If you think back, you may find that it occurred more often when you were outside in the cold, for instance.