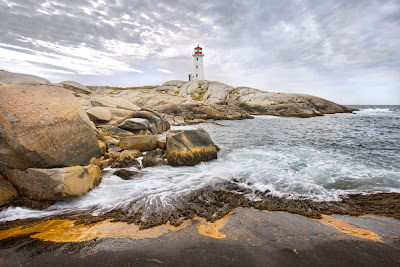 The image above is Peggy's Cove. It's to Yosemite is to the US - it's been photographed to death. This raises the question of whether there is any value in even opening your camera bag when you visit such places.

I think there are several reasons you might want to give it a try.

1) You can challenge yourself to produce a good image, regardless of whether it's been done before - it hasn't been done by you yet!

2) You can challenge yourself to see it in a new way - you could get lucky.

3) Working with photogenic material can be a good exercise, you know you should be able to get a good picture rather than doubting that the scene is worth it - now all you have to do is figure out how. The whether isn't an issue. So many of our images we can't tell if we shouldn't have taken out our camera in the first place or we just didn't know how to work the scene.

4) Cliche scenes tend to be popular with viewers and frankly it doesn't do any harm to make some money off of people who prefer easily understood images of classic scenes. It can't be any more prostituting yourself than doing advertising photography.

As it happens, despite the commonality of this scene, specifically Peggy's Cove, and lighthouses in general, I quite like the image. I like that I was able to find a good viewpoint and capture the foreground dark rock and yellow bands and the waves in the patterns they came in.

It took over an hour to get this image, waiting for tourists to come and go and capture at the split second when the busses happened to be spaced out exactly right. That the sky complements the foreground is sheer luck - but at least I was prepared to be lucky - a topic for another day.
Posted by George Barr at 11:57 pm

It was worthwhile to try it.
This is a great picture!

Thanks for this post, George. I've been sort of sneering at pics of e.g. sunsets but I won't any more. They'll still be cliches but I'll challenge myself to see how I could do it better.

I've just come to your site from reading your 3-part series at The Luminous Landscape on improving our photography.

I'm a moderator of a large group of photographers in Madison, Wisconsin. Because of all the pictures I see every day of one city, I've come to realize that cliched pictures are really relative to their context. The picture at the top of this post may be of a point that's been shot thousands or hundreds of thousands of times, but I've never seen it before. To someone who lives a mile away from it, it might illicit a groan.

I've also learned a lot about how many different takes on a single object photographers can come up with. We sometimes take photowalks, where 7-12 of us will walk around in one location and take pictures. Nobody comes up with the same shot.

Your fourth point is something I've come to grips with lately. While I haven't begun making much money off my pictures yet, I can gauge their popularity and the cliche ones definitely rank up there pretty high.

Other reasons to shoot in over-shot locations:
- weather conditions are always different, especially cloud patterns.
- The exact set-up of natural items (trees, rocks, etc.) can change over time, so your shot may never be recreatable because of a transient condition.

I was just in Yosemite recently and was hard-pressed to make unique images, especially since the sky was clear blue, but I think I was able to anyway.

George - You should create an Imagekind.com gallery. It's a pretty cool concept. I'd love to see your art up there for sale. Email me if you do!

Thanks everybody. Meredith - I have wondered in the past about going this route since the retail gallery route is definitely a loser. Particularly with colou images I could see trying something like Imagekind. Wonder what the pros and cons are.

George, I always try to say yes, before saying no. What I mean by that is if I go to an area that has been shot millions of times, for example, almost anywhere on The Blue Ridge Parkway, I try for something different. I go with the mindset that I've never seen any picture of the parkway that was shot 'today'.

Each day is different and unique: could patterns, weather, breeze, sun, shadow, birds, etc. It's all different, so I just happily snap away!

I love this photo - it has an incredible 3D depth to it.. Can you say anything about the post-processing? Did you use an HDR technique or tone-mapping plug-in?

Post processing was done in the usual way and that was all for a long time, but with some experience of akvis enhancer, I decided to try it on the image and with a bit of toning down of the effect and none in some areas like the sky, I quite like the result. I still keep the unenhanced version too just in case I tire of the effect or wake up some day and decide it's way over the top.

I just saw this post referenced in your latest one and I had to chuckle, as I had the same dilemma when going to Peggy's Cove. I too wound up trying to do something "different" by using a low-angle shot, here's what I came up with (I still need to clone out the people!)