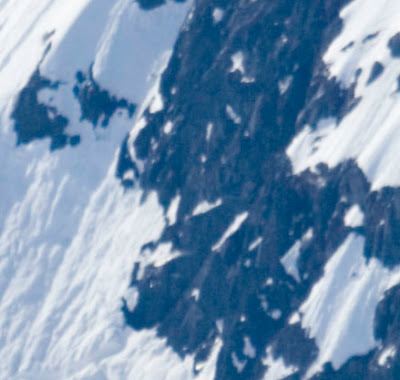 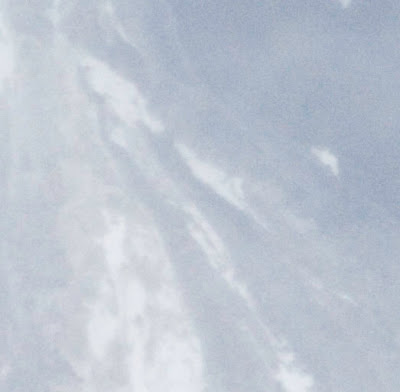 As I commented previously, I rented this lens for the trip, feeling (accurately as it turned out) that a lens which gave me 400 mm. with image stabilization would be really useful.

In practice, the lens turned out to be a great disappointment. It's quite possible that some of my frustration was due to trying to shoot from moving, vibrating ships at the full 400 mm. but checking the images it's clear that this particular example was extremely and unuseably fuzzy near wide open contrary to reviews I had checked and that while at f11 it's resolution is acceptable - it's hardly wonderful. Even then images require substantial sharpening (up to 2 pixels wide which is twice as much as I ever normally use).

The images above were shot at 400 mm. and show 100% crops with no sharpening, at 6.3 and f 10, the slowest shutter speed 1/500 which should be adequate even without IS which was in fact used in both shots. I'm pretty sure the problems relate to the lens and not my hand holding as the results are very consistent across all the images.

The lens had a tendency to back focus which rendered near images hopelessly out of focus.

Unfortunately none of the images I made with this lens will make acceptable large prints (17X22) and many won't even make an 8X10 - very disappointing. Whether I'd have been better to use a 2X extender with my 70-200 is something I don't know the answer to. If I can stop down to f11, the results are marginal - bottom line, unless I hand pick a copy of this lens - it is unuseable.

Of interest is that this finding coincides with that of Michael Reichmann and disagrees with a number of other reviewers, suggesting sample variation is a major factor - I'd be very suspicious of any used lens on the basis that if it were one of the good copies, the owner would not likely be getting rid of it.

Needed really is an IS version of the 400 mm. f 5.6. I do have a 300 L but not the IS version - in hind sight I might have been best to sell my non IS and invest in the IS version and shoot with the 1.4 extender - of course I have not tested this.

the vast majority of the images I shot with this lens were in fact shot at full 400 mm. and I probably didn't really need the zoom.

Recommendation: if you consider this lens, test carefully before committing your hard earned money. Questions arise like has quality control improved (ie. are newer lenses more likely to be good ones) and how many old lenses are you likely to have to go through to get a good one - if it's 2 or 3, it might still be practical, but if it's 5 or more, well forget it.

Bottom line: I will be looking for a better alternative.
Posted by George Barr at 1:00 am

As a rental, there is also the chance that the lens in question was abused. For that reason, I'm not sure I'd damn the entire line on the basis of one sample, in particular one that you don't know how many times it's been banged around...

Good point, also it wouldn't surprise me to find out that the rental lens was in fact one returned because it wasn't up to snuff. I guess what it means is that one could consider purchasing a new one only on the strict condition that it could be thoroughly tested first - I do know my local dealer (who gets lots of my business) is happy to let me do that and would take it back several days later if I was unhappy. I still suspect that replacing my 300 non IS with the IS version is the most sensible plan - though even there some reviews have suggested the IS version isn't as sharp as the non IS - again test before one commits.

It's too bad you had a bad sample of this lens. Good copies of this lens are really impressive: nearly as sharp as a good 70-200, with a much wider zoom range. I use one a 5D, and it's a great combination for landscape photography. 8x10's are easy, and with proper stabilization (harder than it seems at 400mm with such a long lens barrel!) larger prints aren't a problem either.

I bought the better of two copies when I got my 100-400. The lesser copy had a somewhat soft right edge, but was otherwise decent.

Michael Reichmann's review did a lot to give this lens a bad reputation. His review shows some of the worst performance I've seen from this lens. It's unfortunate that the first thing people think about this lens is "oh, that's the soft telezoom?", as a good-performing copy is a very versatile tool, as you lamented that it would have been had your copy only been decent.

Here's a shoot-off by Romy Ocon that might be illuminating to "the 100-400 situation". He had a soft copy and thought the lens was a poor performer compared to his primes until he tested a friend's copy. As you can see, this second copy is extremely impressive. There's really not much in the difference between this sharper 100-400 and the 400/5.6. Doesn't get much better than that!

George, I'm sorry to hear about your dissapointing experience with the 100-400mm. I have to agree with Dave and Chris that a good copy of this lens is a stellar performer. As Chris mentioned, Michael Reichmann did stop using the 100-400mm shortly after he started using a 1Ds claiming that the image quality wasn't up to snuff. Interestingly enough, while recently field testing the 1Ds Mk III in Madagascar the 100-400mm was the lens he used most. Short of testing every lens yourself the best you can do is to attempt to get a cross section of opinions from mulitple informed sources. I find that the canon lens review listings at canon-reviews.com to be helpful. Of course this doesn't account for sample variation - you can always get a lemon.

Thanks for review, it was excellent and very informative.
thank you :)

Here is my reviews and I want to tell you this person is right but here is more information about this product. so here is another just go to this link.
Canon 100-400mm f4.5-5.6l ii usm mk 2 Lens