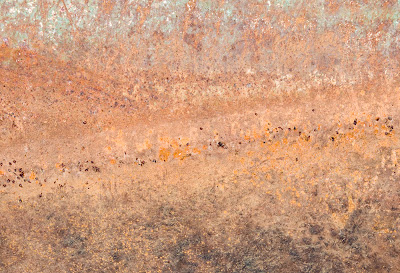 My assignment for the day was to move a dump truck load of top soil my wife ordered for the garden. Backbreaking work not helped by a torrential rain which while not soaking into the top of the pile, flooded the bottom of the pile considerably adding to the weight.

Of course the wheelbarrow had a flat tire and several trips later (long sad story), the wheel barrow was fixed, but it had sat out over the winter with some water in it - ok, so I'm not good about putting tools away - but I swear it had the flat already. Anyway, it rusted and I noted as I flipped it back upright that the rust and remaining green paint of the barrow made interesting patterns.

I shot it with the FZ50 including this image which is actually a two shot stitch, hand held and stitched in Photoshop CS3 (trying it out - too early to say if I like it as much or better than PTGui). I did play it safe and haul out the big camera to shoot it that way, 90 ts-e, stitching, and tripod, just in case.
Posted by George Barr at 5:05 pm

Thanks so much for sharing the photo. You have showed me how to see a picture. I am trying to repeat what you had done from the original to get to the final. (Hope that you don't mind.)