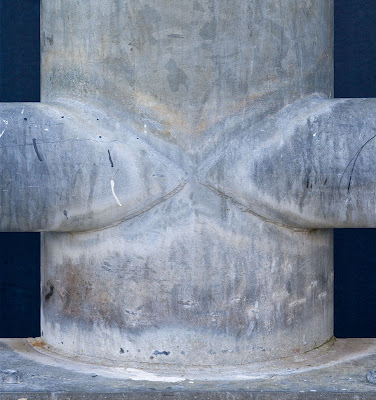 Standing in line to return to the ship, I was caught by the pattern, colour and texture of this post used for tying up ships. It's shot with the 100-400 (it was located behind a barrier) and isn't super sharp but does respond adequately to smart sharpening. I did use Akvis Enhancer but had to turn it way down and it's debatable whether it's really useful in this image - sometimes it's magic and other times it adds nothing or detracts from an image - just like any tool - it must be used with caution, intelligence and always giving yourself an out to return to the unenhanced version should you decide it's too much.

I could easily have used curves to increase the contrast in the patterns on the metal but it's the subtlety of pattern and colour that I like here. I might change my mind in the future, but for now this is how I like it.
Posted by George Barr at 11:18 am