Back At The Machine Shop 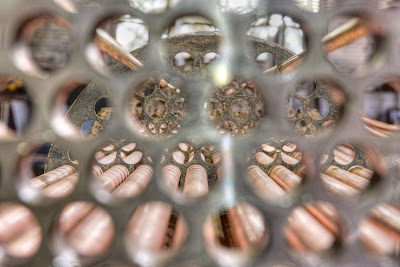 The day off so I headed back to Independent Machine Shop, delivering a couple of prints, then carrying on to photograph. This was my fourth trip and I wasn't sure that I'd find much - it was every bit as rewarding as any of the previous trips. The two images here are just a start from today's shoot.

I went to convert the images into a lightroom web upload but several of the images are stitches and won't fit in lightroom. Hopefully that's a problem that will be fixed soon.

In the case of the second image, I could have used Helicon Focus to have the entire heat exchanger in focus, but actually preferred it blurred like this.

The first image looks a bit too well lit - think there is more editing to be done there. I'd actually spent an hour on the image (stitched with Photoshop CS3) before I realized that Photoshop had messed up the stitch and I had to do it with PTGui which rarely lets me down and did this stitch just fine. I used the flawed but edited image as a reference for editing the new stitch - they didn't come out identical, but the new one is as good and that's all that matters.
Posted by George Barr at 10:42 pm