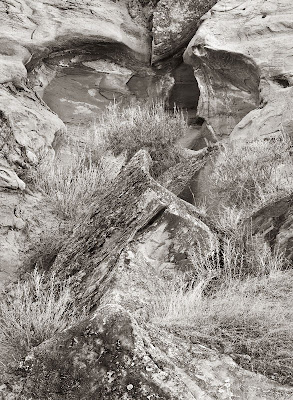 It took 4 13X19 prints and 3 uploads until I was reasonably happy with this image. I played with cropping, I did some burning, then I noticed that the top of the cave was lighter (it actually opened up but looked like a poor dodging job, so more burning, then I saw that while I had cropped some grass at the bottom which weakened the left bottom corner, one blade stuck up in front of the rock, some cloning fixed that.

All of this of course was after hundreds of changes made to bring the tonality of the image into line. Included in those changes was something I'd not done before. I had difficulty deciding whether I preferred a blue or a yellow filter, both seemed to add something, but to different parts of the image. The solution, do both. I created a duplicate image layer then did a black and white conversion on both, then used a black mask on the upper image so that filter didn't have an effect, then painted in the effect as and where needed - worked a treat.

The original image is below. I had found it too cluttered and couldn't see a worthwile image in it when reviewing the images in Bridge, but watching a movie with my wife that I'd seen before, I got out my Epson 2000 portable storage device and flipped through images until I came across this one. The Epson tends to darken images which sometimes shows you things that look a bit washed out when viewed properly in Bridge. So it was with this image. 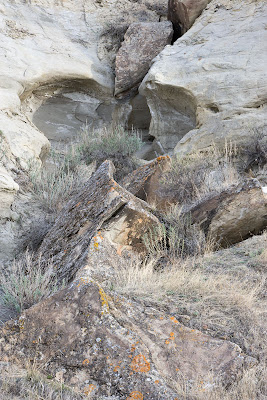