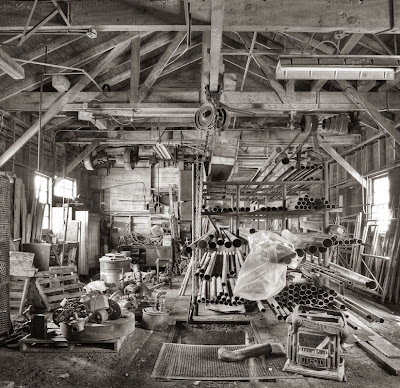 As they say, the solution to this image was "non trivial". I shot three exposures, bracketing from full interior detail to windows not blown out, combined them in Photomatix HDR, then converting with the same software to tonemapped. I then went into Photoshop and corrected perspective (the lens had been tilted up to include roof). I decided the roof was too cluttered and cropped it.

The image still didn't look right so I used Michael Reichmann's unsharp mask (25/50/0) which has the effect of increasing local contrast. Now it was looking fairly natural. Several more masked curves adjustment layers and the image was better balanced.

There's still considerable flare around the windows but when you consider that those windows are the only light source and the room is "well lit", the camera did quite well to record it - I did have the sense to clean the lens just before the shot - any dust specks on the lens show up as white spots in the image. I think the lens did quite well for itself (17-40).
Posted by George Barr at 11:29 pm